This is part two of a three part series about Essaouira. Be sure to read Part I – The People, first.

In Morocco, as in most places, food and hospitality go hand-in-hand. Each of the amazing people we met during our stay in Essaouira either provided food to us or shared a meal with us as part of our meeting, and the food was in all cases extremely good. Beyond the food we shared with our new friends, we ate at some wonderful restaurants in Essaouira and no account of our time there would be complete without an accounting of the fantastic food – the best we had in our five weeks in Morocco.

Our First Lunch with Lynn

Lynn took us to a small restaurant, Vagues Bleues. It was the best meal we had in Morocco, hands down. The place was small – seating only about 10 people comfortably, and the food took a while to come out since it was all made to order and there was only one cook. The cook/waiter/owner learned under an Italian chef and serves wonderful food based on what’s fresh at the market that day. Your meal consists of a “salad” followed by your main course, of which there are about 5 choices. 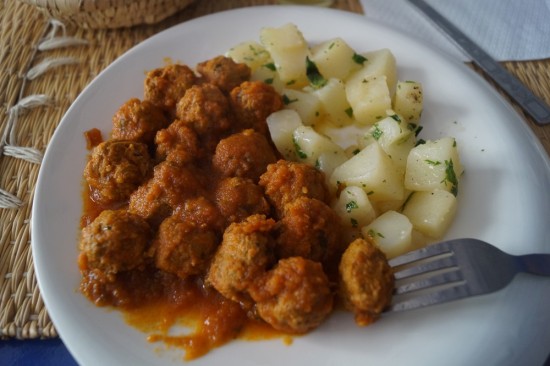 The “salad” that day was roasted squash and peas in a light vinegar dressing, served room temperature. I don’t have a picture of this dish because frankly, I ate it all in about 4 seconds. It was awesome. For the main course, I had fish meatballs, a local specialty made with sardines in a thin tomato sauce. Served on the side were some garlic roasted potatoes. If this were the only meal I was allowed to eat for the rest of my life, I think I would be happy.

Lynn broke out her Moroccan Arabic to inform the cook of Danielle’s garlic and onion allergy, and he gamely accepted the challenge, serving her pan-roasted shrimp with an avocado salad. Danielle loved it and in a matter of minutes both of our plates were clean. In my case, I literally took pieces of bread and cleaned the plate of the tomato sauce completely. 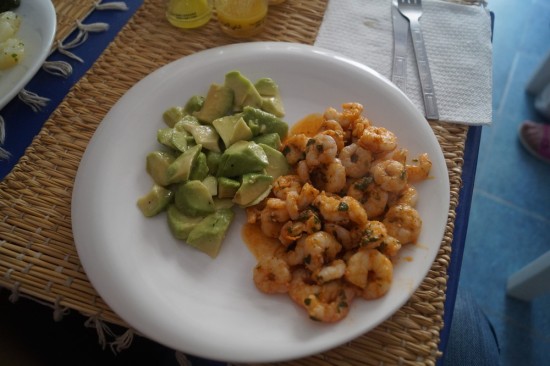 Our Second Lunch with Lynn

On a Friday two days after our first meal, we met up with Lynn for a lunch of traditional couscous at one of her favorite spots. This restaurant was a little bigger and even accepted credit cards, but Lynn assured us it was the best couscous in town. It didn’t disappoint. I’ll be honest, I wasn’t a fan of the couscous in Morocco as a whole. I had it maybe 6-7 times, and only liked it twice – this was one of those times. 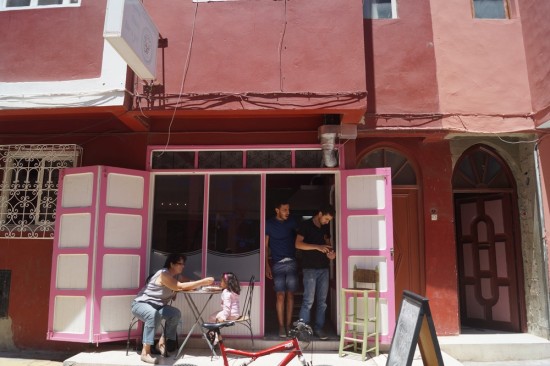 The unassuming exterior of the couscous restaurant. 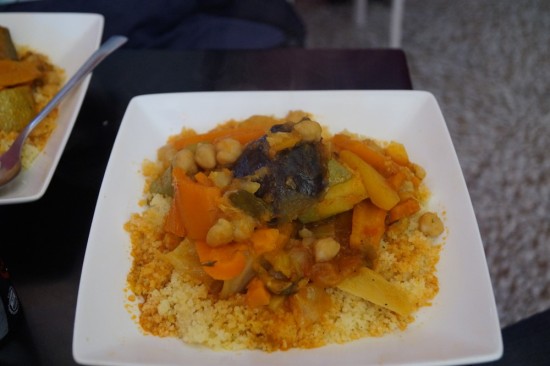 The couscous here is cooked in a large tajine filled to the brim with couscous and then topped with sliced vegetables and/or meat. After simmering for about half an hour, it’s served to you in the tajine, a portion that’s truly American in its size. I never once finished an entire portion of couscous, though I tried my best with this one as it was the best I’d had to date. 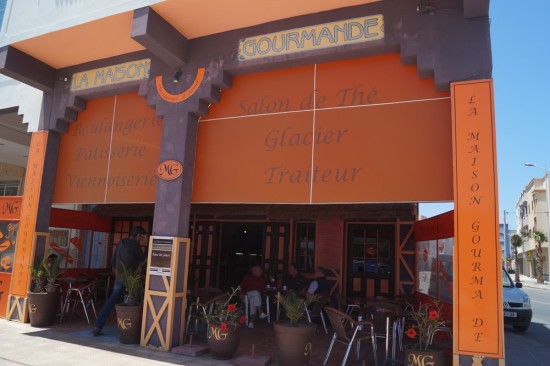 The exterior of La Maison Gourmande, just a couple blocks from our apartment.

This gourmet bakery was just around the corner from our apartment, and it just so happens that Lynn’s husband works there. We stopped by after having couscous so we could get dessert and a coffee. The most popular coffee drink in Morocco is called “nous-nous” which is a small cup of coffee that’s half espresso, half milk. You then stir in a generous portion of sugar and drink it scalding hot. We each ordered one as well as a pastry of our choice. 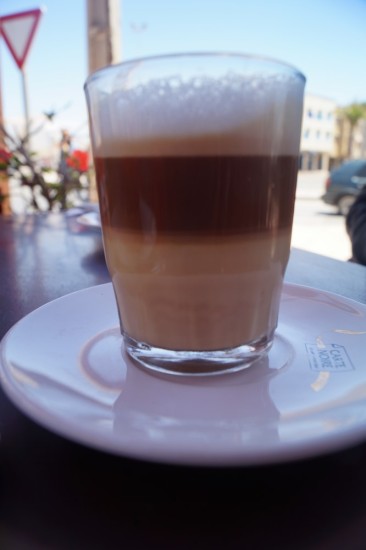 Nous-nous as it is served, before it’s been stirred.

We had been to La Maison Gourmande once prior and I had ordered some small pastry that was really good, but really small. Learning from my mistake, this time I ordered this beast: 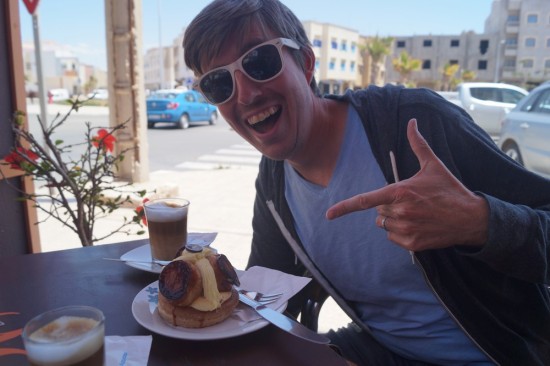 The pastry to end all pastries.

It’s a huge round pastry stuffed with vanilla custard, then topped with more vanilla custard, onto which three smaller custard-filled, caramel-glazed pastries are attached. I’m pretty sure this thing weighed in at about 2 pounds and probably had about 2,000 calories. It was delicious and I made quick work of it.

Danielle had a more sensibly-sized cherry tart that she thought was outstanding, though there was one strange thing about it: the cherries still had their pits. She lobbied Lynn to tell her husband that they should use pitted cherries in their tarts. We’ll have to go back sometime to see if they took her up on the suggestion. 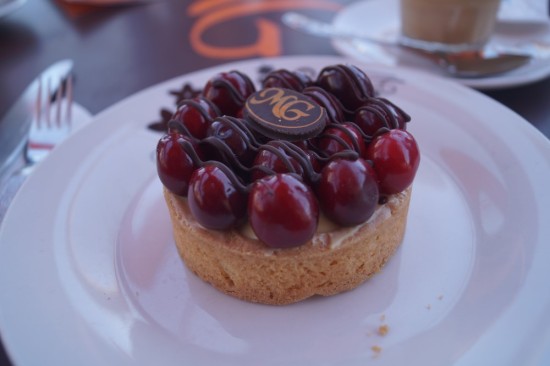 Run by a French couple that moved to Essaouira years ago, La Decouverte is a gem in the center of the city’s Medina. The food is traditional Moroccan, and they serve some things you can’t get anywhere else in the city, namely camel meat couscous and pigeon pastilla. Deciding which to get was a very tough call for me, but I ended up going with the pigeon pastilla. Danielle ordered a fish pastilla, as it could be made without onion. 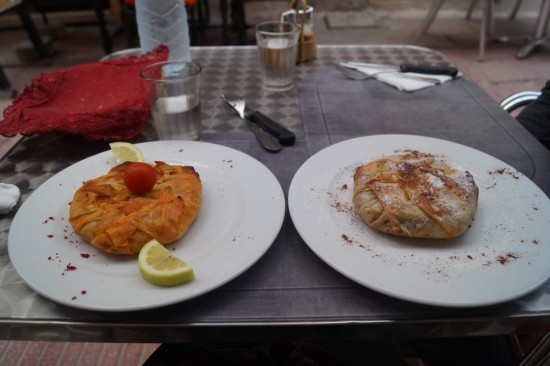 Danielle’s fish pastilla on the left, my pigeon on the right. So simple, and so good!

A pastilla is a little pie of meat and sauces wrapped in thin pastry dough and baked. We had had one several weeks ago at a touristy restaurant outside Marrakesh and weren’t impressed, so we were hoping that the more capable hands at La Decouverte would serve up something better, and we were not disappointed. My pigeon was cooked in a slightly sweet brown sauce and the pastilla was topped with powdered sugar, giving it a wonderful sweet and savory blend. Danielle’s fish was so meaty that you could close your eyes and almost imagine it was chicken. She filled up pretty quickly, so I got the pleasure of eating all of mine and a third of hers. Heaven.

One of the great things about staying in an AirBNB apartment is that you have a full kitchen at your disposal, eliminating the need to find an affordable restaurant for dinner every night. We took advantage of our kitchen one night to try our hand at cooking a traditional Moroccan tajine. We headed into the medina, bought two whole fish from the market along with couscous, and some fresh veggies. After getting tips from Hanane downstairs and reading several recipes online, we threw the ingredients together and put the tajine over the fire. 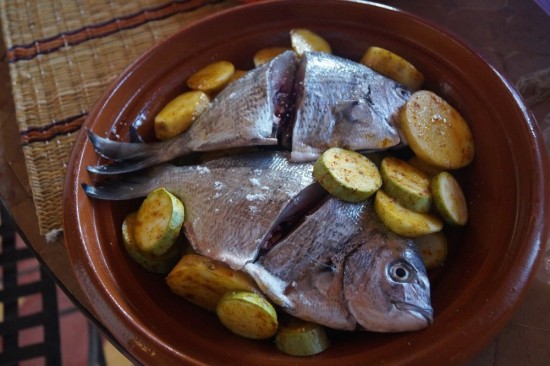 As I mentioned in Part I, Hanane also surprised us on our last night in town by bringing up a tajine of couscous. While the restaurant couscous we had with Lynn was good, this Hanane’s was the best we had in Morocco, hands-down. The meat was tender like brisket, it had a little spice from the peppers, and the veggies were well seasoned and just perfectly salted. 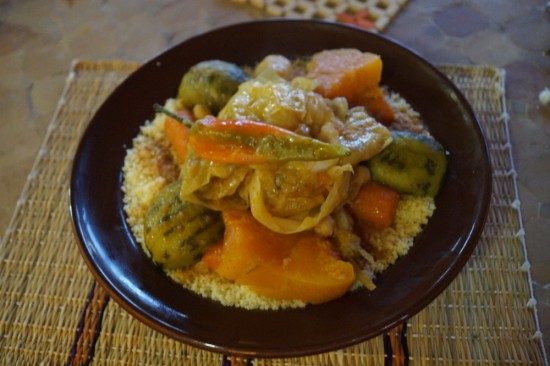 Just looking at this picture makes me want to get on the next flight to Morocco.

Our last stop on this brief tour of Essaouira’s food scene takes us to the US Peace Corps volunteers me met, Kabir and Olivia, and the host family they were staying with. The family graciously offered to serve us a meal, even though it wasn’t yet dinner time by Moroccan standards. Despite that, they offered up a three-course feast which was more than adequate as a dinner meal.

The first course was similar to a coffee cake, seasoned slightly with lemon and covered with a light dusting of coconut on top. I ate about 3 huge wedges of this stuff, along with a healthy several cups of fresh-brewed coffee. 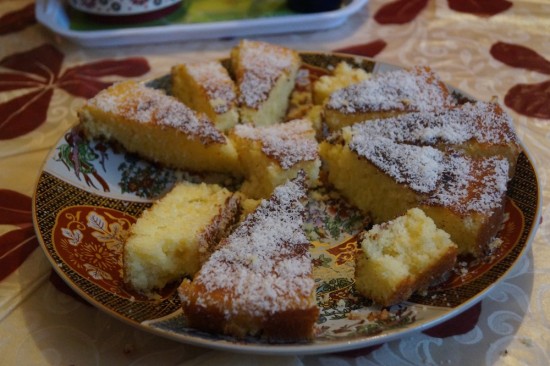 The coffee cake. A little drier than we’re used to, but it went great with the coffee.

The second course was a heaping mountain of Seffa, a pasta dish made with broken vermicelli noodles cooked with raisins and then topped with crushed peanuts and powdered sugar. Sounds weird, right? It was great! I don’t really know how, but all the flavors worked together and the texture and blandness of the noodles was enough to offset the strong sweetness of the raisins and sugar. A surprisingly well-balanced dish. 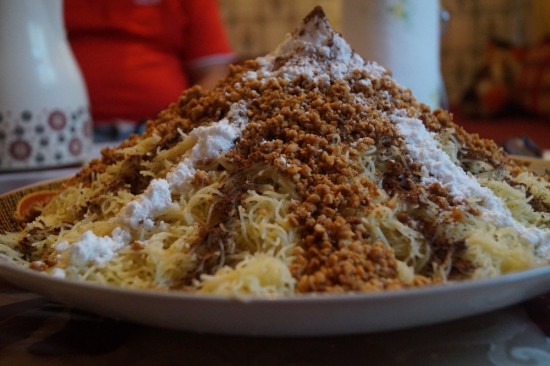 For dessert, they served a massive plate of watermelon as well as the peaches that we had brought with us as a gift. As I am not a fan of fruit, I didn’t partake in dessert, but Danielle assures me that I “totally missed out” and that the watermelon was just perfectly ripe and sweet. 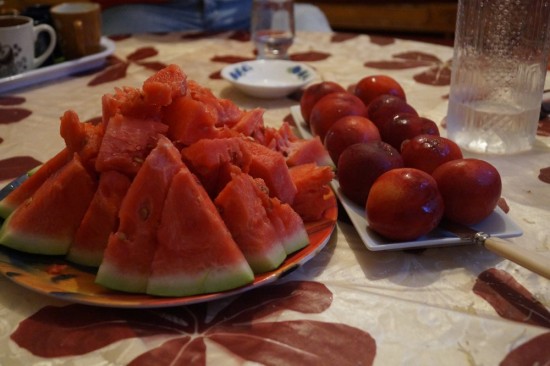 Dessert. I dare you to find fruit fresher than this.

Somehow, a few hours after we left, the family ate dinner. As for us, we rolled into bed and passed out, a food coma overtaking us.

This is part two of a three part series about Essaouira. Next up: Part III – the city!