We arrived in Udaipur on March 16th, which was technically the first day of Holi. This is considered the holy day and the second day is for the color play. We had chosen Udaipur because, based on the horror stories I had read, we knew we wanted to be in a smaller city so at 600,000 it was the perfect size. After we checked into our hotel we headed to the Edelweiss Café for a snack (side note: they have the most delicious pastries as well as a yummy sister restaurant, Savage Garden…yes, that’s really the name). 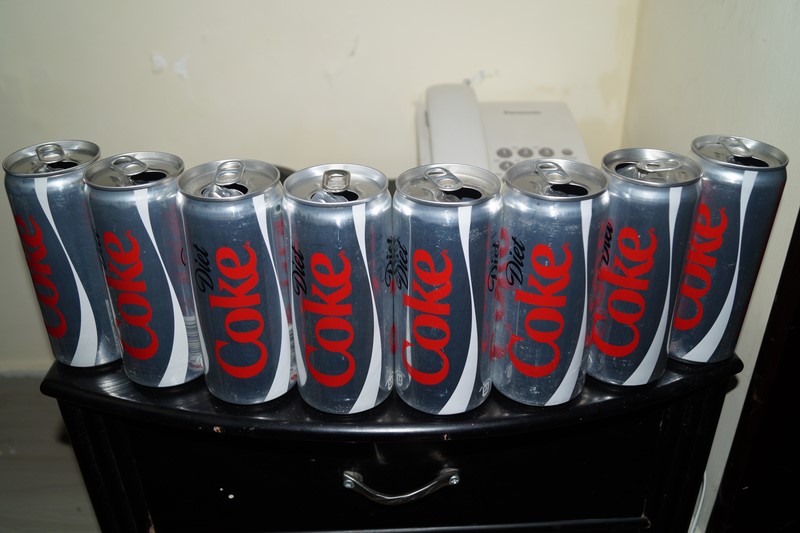 This is just from a few days!

As we sat enjoying our goodies, which for Adam now always seems to include a Diet Coke (see photo), we were surprised to see a couple waving and making their way towards us. Convinced they were approaching someone else I ignored them until they were right next to our table. In a charming French accent I heard “You don’t remember us”, which caused me to do a double take. That’s when I realized it was the couple we had met in Fort Cochin, Marion and Kevin from Brittany, France. We were once again brilliantly amused by what a small world we live in. For those of you not familiar with Indian geography that would be like meeting someone in Miami and then running into them two weeks later in Chicago. We were thrilled to have friends to play colors with, safety in numbers, and made plans to meet the following morning at 9am on the bridge that connected the two sides of the lake.

After parting ways we spent the rest of the day wandering through shops and enjoyed dinner at a rooftop restaurant across the street from our hotel. While unplanned, our elevated position allowed us to enjoy the celebratory fireworks and explosions that began around 8pm (apparently in India ‘holy day’ also means ‘blow shit up’ day). 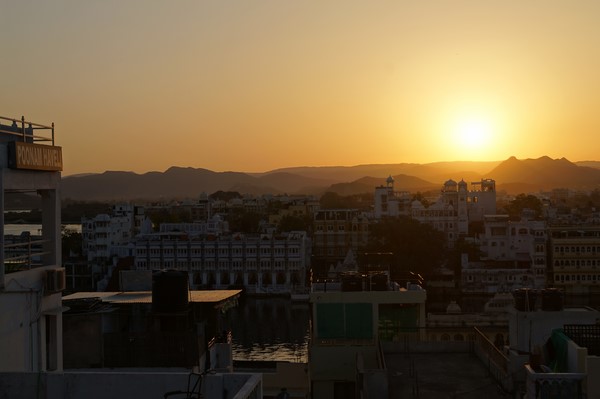 Before the celebrating (aka: explosions) began we were able to enjoy a beautiful sunset over looking the lake from the rooftop restaurant.

Throughout the streets, including the one directly below us, ‘trees’ had been erected. It was clear that the intention was to light these things on fire, since they were covered in straw and fireworks, although it didn’t seem like the best idea since they were built directly under low hanging power lines, 20ft from peoples’ doors and smack in the middle of intersections. As final preparations were being made I noticed that everyone on the streets were Indian and everyone on the roofs were foreigners (aka white). Despite being in a relatively safe position (although I still think if you’re close enough to see the individual fireworks you’re too close) many of our roof-mates (including myself) still appeared to be weary of what was about to happen,  which was hilarious in contrast to the nonchalant attitude of everyone on the street. 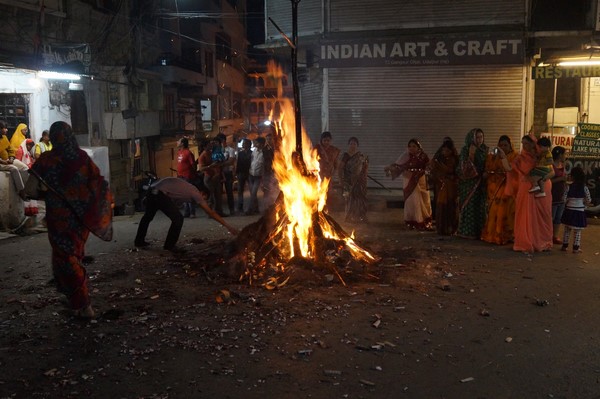 This doesnt really capture the craziness…dont worry, we have a video coming soon!

Even once the thing was ablaze and fireworks were going off like crazy, pedestrians and motorbikes just continued on their way as if nothing out of the ordinary was occurring. Meanwhile most of us on the roof retreated for cover, terrified of being impaled by a rogue rocket. By the end of the night I was left feeling grateful for our firework safety practices at home (those suckers are loud!). 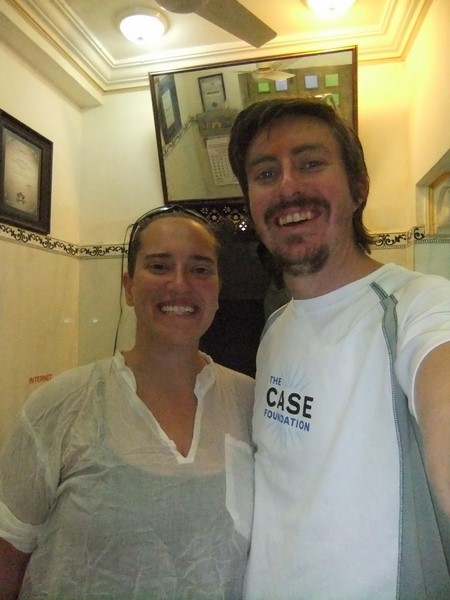 Dressed in white and optimistically ready to play!

The next morning at 9am, dressed in white like stupid tourists, we made our way out into the streets. At first I was disappointed because the streets were pretty much empty. There were random groups of children playing but they didn’t seem super interested in involving us. A few people began to interact with us, but it was nothing like the jubilant atmosphere I had been expecting. Around 930am Marion and Kevin met up with us (on their side of the bridge) and we began to make our way towards the main square (back on our side).

We then began to run into more color play and my spirits picked up. Soon locals were going out of their way to play with us and we quickly went from white to Indian tie-dyed. Marion and I were naturally the popular targets and were quickly covered in bright shades of blue, green, pink, yellow and purple. While it was weird to be in what can only be described as a stranger hug parade, for the most part it was fun. Everyone was in good spirits and you could tell they loved involving us in the festivities. 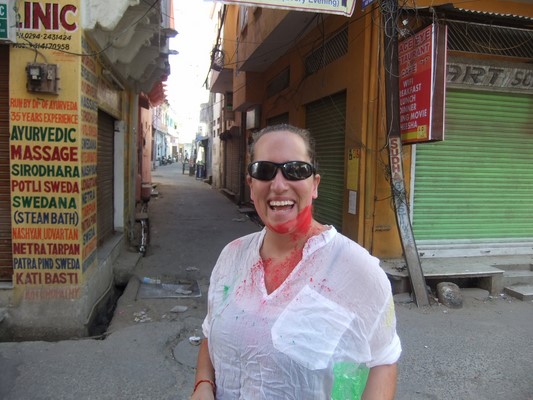 My first dash of color! 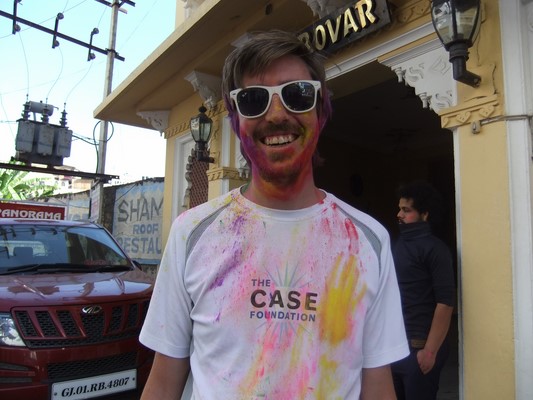 As we crossed the bridge we ran into our first group of handsy teenagers. Again Marion and I were the main attractions, or rather our breasts were. I’ll give it to the boys, they were sneaky and had the hug/grope gesture down. It was as if they had been preparing for this all year and planned to take full advantage of Holi (which I’m pretty sure translates as ‘grope a white girl’). We quickly learned and adopted a defensive hugging position with an arm held across our chests. This new development was mildly annoying, but I was still having a pretty good time. It all seemed innocent enough and was slightly entertaining so we just made our way to the other side, protecting the ‘girls’ as we went. 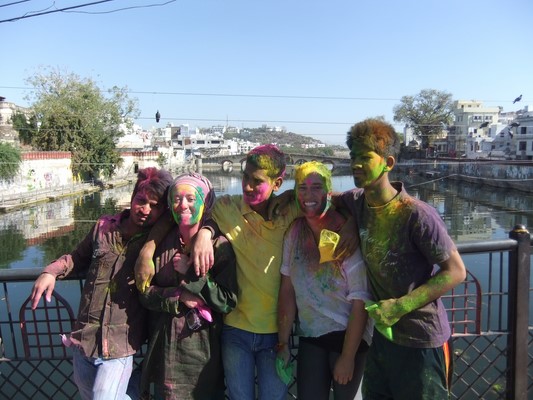 Bridge pass #1 – a little handsy, but nothing we can’t handle.

When we finally made it to the main square with the temple we were able to relax. While there were more people it was a 70/30 split (foreigners/locals) and there were cops everywhere, so I instantly felt more at ease. The atmosphere was great and the air was filled with choruses of ‘Happy Holi’ and, of course, clouds of amazing colors. We took the opportunity to escape up the stairs of the temple and got some great views of the party below as we rested on the marble steps. 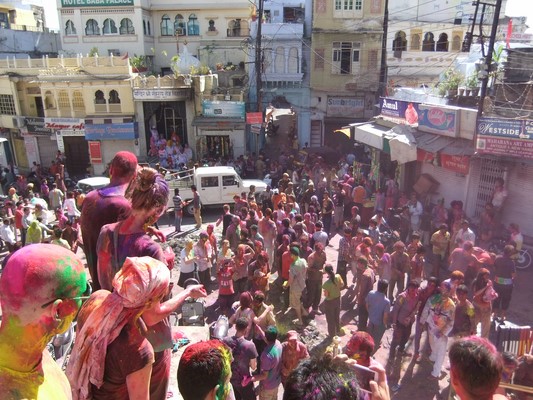 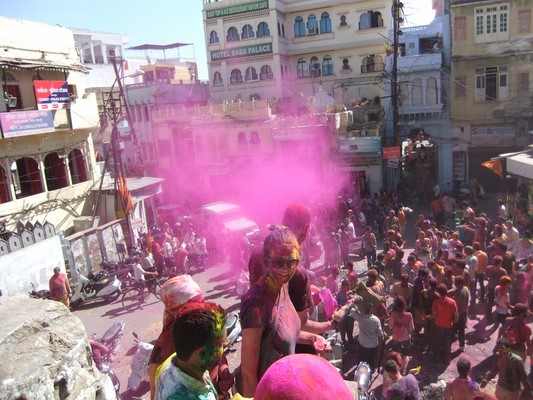 I LOVED the color clouds! They were everywhere but were kind of hard to catch on camera. 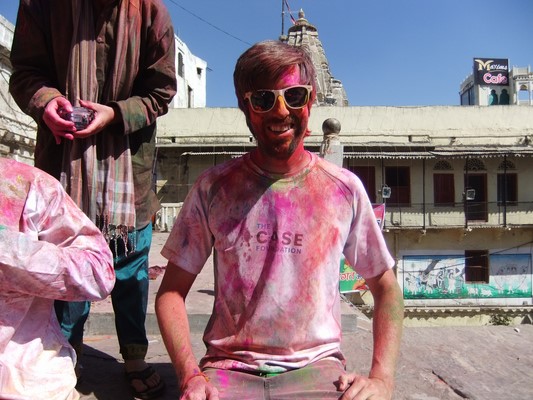 We all had received a bit of color by this point 🙂

Around 11:30am we left the square and began to make our way back to Marion and Kevin’s hotel. Looking back now we should have just said goodbye at that point and retreated into the safety of our room, but at the time it seemed harmless to stay out for a bit longer. As we made our way back across the bridge it became instantly clear to me that the atmosphere had changed. Not only were there more people in the streets but the drinking was in full swing. This time my arm guard wasn’t enough to protect me as hands came from many directions and boys began to act like dogs in heat. The occasional boob grab I can handle, I made it through college didn’t I, but the dry hump gangbang was not something I wanted to deal with. What made things worse was that my proximity to Adam didn’t seem to matter. I clung to his side and had him walk between me and the crowd, but it made no difference. The horndog gangs shoved in between us, breaking my hold, leaving me feeling really vulnerable. Once we made it off the bridge things got a little bit better, but I was definitely ready to be off the streets. I cursed myself for not anticipating the situation better and dreaded the trip we’d have to make back over the bridge to our hotel. 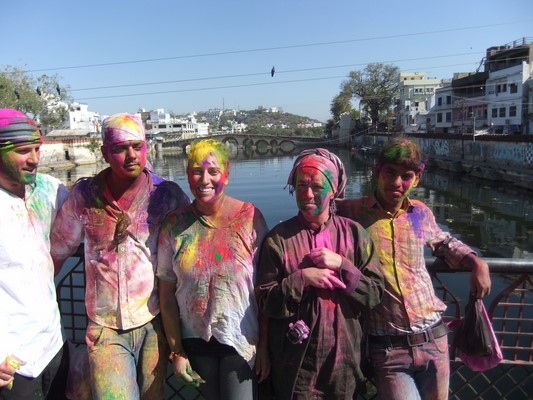 Bridge pass #2 – Things were getting a bit more grabby so we were more on guard…the beginning of the end.

For the time being I tried to not think about it. We enjoyed drinks and great conversation on the rooftop of our friends’ hotel and I tried to take advantage of time with native French speakers to brush up on my vocab (have I mentioned I’m trying to relearn French?). Around 2pm we were all getting tired and, even though I would have loved to put it off for a bit longer, I knew it was time to head back. Our final pass on the bridge was probably my least favorite part of the day. Since I knew what was coming I not only suffered the reality, but also suffered the anticipation. The trip was basically just the sequel to the last pass, so I put my head down and just pushed through as fast as I could. 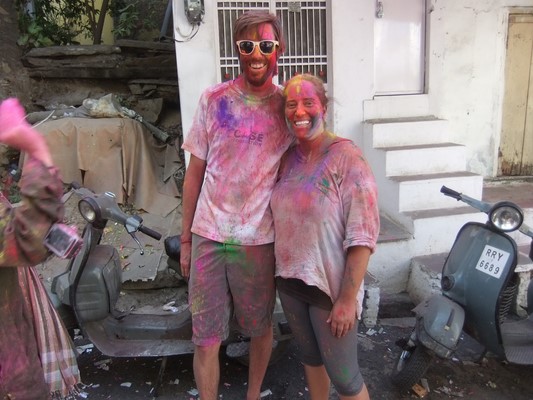 By the end we were colored from head to toe!

Once we were back in the room I was able to relax again and for the first time we had a chance to notice just how ridiculous we looked. We headed straight into the bathroom and couldn’t stop laughing as each removed layer revealed a new pattern of splotches. We took turns washing away the color and quickly the bathroom floor resembled the aftermath of a Muppet massacre. Purplish, red liquid covered the floor as we rang out our clothes and tried, without much success, to wash out our hair.

It might not be clear from my account, but in the end I really had a good time. Were there moments when I wanted to GTFO, sure, but they didn’t outnumber the amazing moments. Most of the people we played with were respectful and in good spirits and so many of them were thrilled that we had chosen their town for our Holi initiation. Plus all of the children were having so much fun and watching them apply color war strategy to their play was hilarious. There were groups that had staked out higher ground and spent the day pelting unsuspecting passersby with color bombs (water balloons).

So despite the mess and temporary feelings of vulnerability, would I do it again? Absolutely! Playing colors on Holi in India was amazing! But are there things I would do differently or recommend to other women thinking about playing colors? Absolutely! Here are some of my best tips for having a safe and happy Holi:

In the end just be safe, be smart and have a Happy Holi! 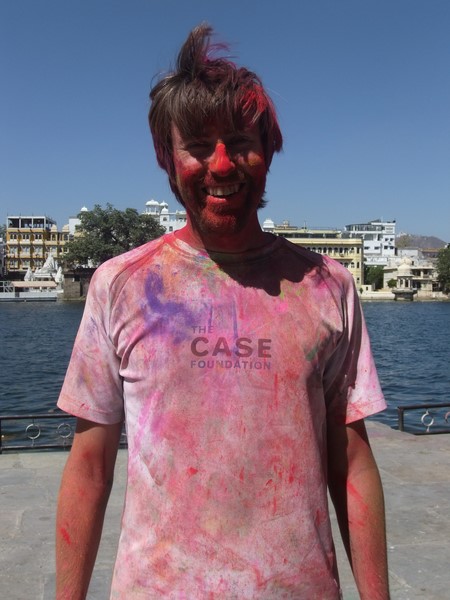