(Our apologies for the lack of photos. Because we assumed we would have time to revisit stops after our Apartheid Museum visit we didnt snap any pictures on our first go around. Shame on us, lesson learned!)

One of our favorite things to do in big cities is take the Hop-on Hop-Off bus (or HoHo). Yes touristy, but there is no better (or affordable) way to get a feel for the layout of the city while being chauffeured to all of the ‘must sees’ destinations. (My favorite is Barcelona and I STRONGLY encourage everyone to take advantage of it if they visit!!).

Since Adam was still a little nervous about driving a manual car through downtown and I was still freaked out by the threat of ‘smash and grabs’ (yup, they smash your windows at stop lights), especially after we were (possibly) robbed the day before, we were thrilled to learn that Johannesburg had its very own HoHo! After unsuccessfully trying to book our tickets online, we headed to the Origins Center to take advantage of their secure parking lot along the HoHo route. (Attention South Africa – we’re going to need your websites to accept credit cards. This bank transfer business is bullshit).

Unfortunately, we hadn’t paid close enough attention to the schedule and ended up waiting at the stop for an hour. If we would have been thinking straight we could have toured the Origins Center while we waited, but instead we just sat huddled in the cold. Honestly, the problem was that we were anxious to get to the Apartheid Museum and were suffering from a bit of tunnel vision. We also hadn’t realized that it was an hour between each bus, since most cities’ HoHo’s run every 20-30 minutes…oh well.

Once the bus rolled up we grabbed our seats and headed towards Braamfontein. While Jo’burg scares me a bit, if I was for some reason transferred here this is totally where I’d live. This hip neighborhood, with trendy shops and funky cafes was great and seemed like what would happen if Chicago, New York and San Francisco had a baby…a dangerous, don’t go out alone at night baby. We breezed through the next few stops: Constitution Hill, Gautrain Station at Park, Gandhi Square (BTW had no idea Gandhi had been a lawyer here), Carlton Centreio, Santorama Miniland and James Hall Transport Museum. At the Gold Reef City Theme Par stop we decided to take a lunch break before reaching our main attraction stop, the Apartheid Museum. Gold Reef was a site to be seen. Imagine a small scale Las Vegas casino across the street from a Six Flags/Great Adventure (sorry non-US friends, we don’t know the foreign equivalents). As we entered the resort we were immediately greeted by the clinging and clanging of slot machines.

Adam and I have very different reactions to the sounds of a casino floor, mine is negative and his is extremely positive. I spent a lot of my childhood in casinos (my dad worked in them for most of my life) and spent my summers in college working on the floor (as a security guard and F&B assistant). So I grew up seeing the depressing side of casinos. The smoky, noisy rooms filled with old ladies and overweight men, fruitlessly pumping the machines full of quarters on a Tuesday morning. On the other hand Adam’s introduction to casinos was Las Vegas as a 20-something guy in college. He got to see the high energy, shiny side of casino’s – free drinks, scantly clad women, cheering craps tables and, did I mention, free drinks. So as we entered the space I immediately got a headache and Adam got high (figuratively of course).

After a fast food lunch at Gold Reef (not the healthiest, but it was our cheapest option), we caught the bus to the Apartheid Museum. This is definitely a must-see for anyone visiting South Africa and we had been warned that it would take a bit of time (~3hrs). 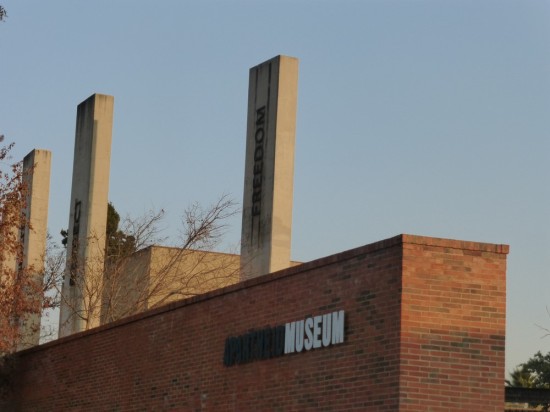 Even from the outside you immediately got a sense of the solemn nature of the place.

What we hadn’t realized was how exhausting and overwhelming it would be. I wish I could say that it was a result of the strong emotional reaction I had, but really it was because of the extraordinary amount of information you’re bombarded with from the moment you walk into the door. 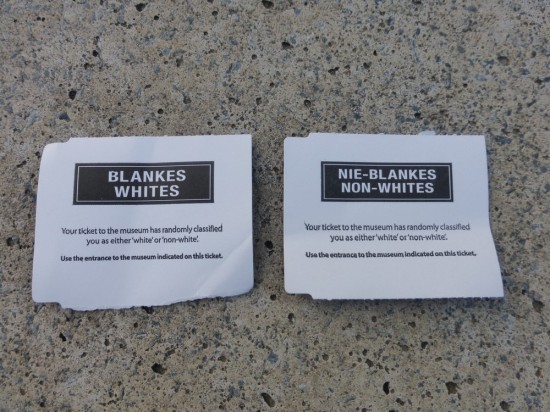 Upon purchasing your tickets you are immediately assigned a ‘race’ and experience the first part of the museum according to that designation. If you get split up, don’t worry, it’s just for the first few minutes.

The exhibits were amazing and really educational, but there was just too much to take in. I realize it’s a huge subject that spanned a great deal of time, and I don’t mean to sound dismissive, but it got to the point where we just couldn’t absorb anything. We found ourselves mindlessly wandering from photo to photo, unable to read any more of the plaques. 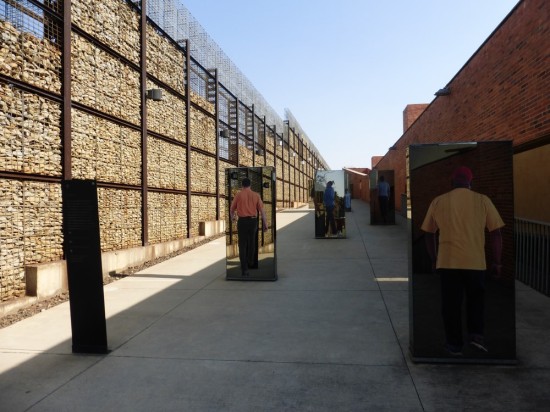 Even the entrance to the main museum was incorporated into the exhibit.

There were a number of installations in the museum’s courtyard that were very inspiring including this message wall. 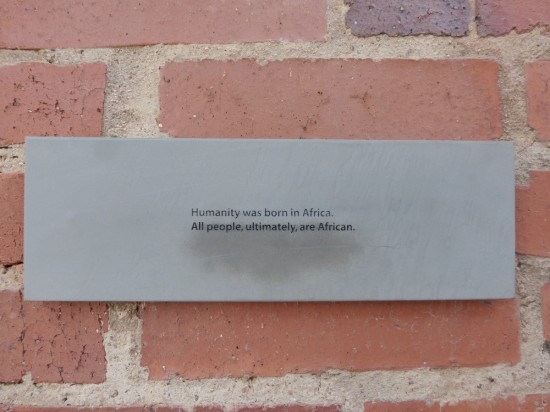 A great reminder that at our core we are all the same. 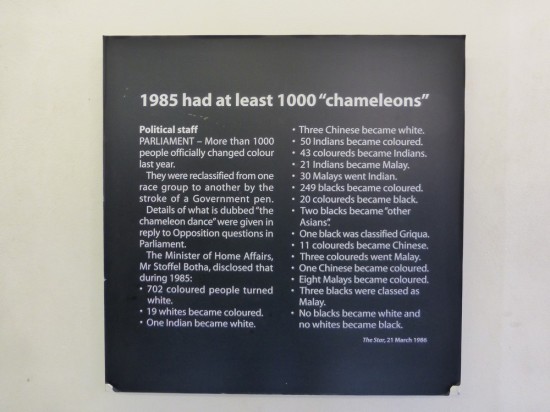 The exhibits were all extremely informative and really highlighted the complexity of the laws. It wasn’t as simple as ‘black vs white” 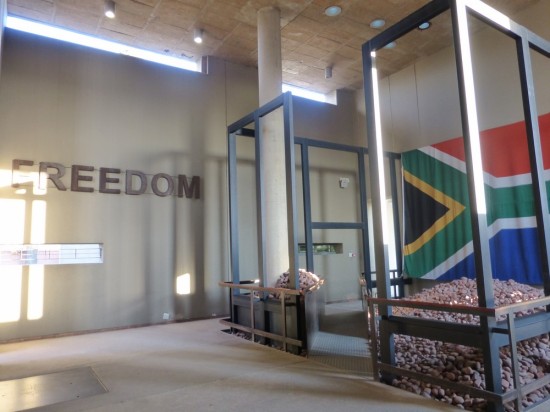 The final room was so peaceful and reminded me of a meditation space. it helped that we were the only ones around.

Additionally there was an entire special exhibit on Nelson Mandela that could have been its own museum. 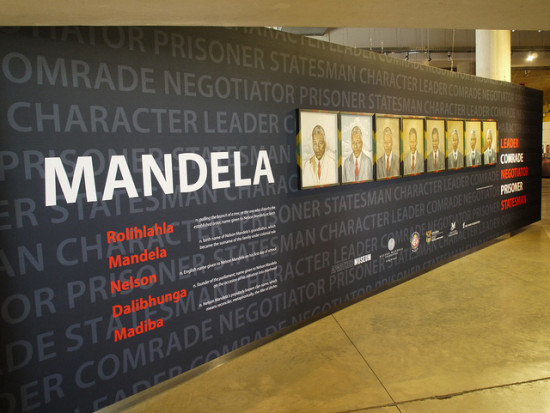 We weren’t allowed to take photos inside, but found this one on CreativeCommons: https://www.flickr.com/photos/martijnmunneke/6268494034

For the record, I am not discouraging people from visiting, but I would recommend splitting your visit over two days. Because this is such an important story you should give yourself time to learn about it. 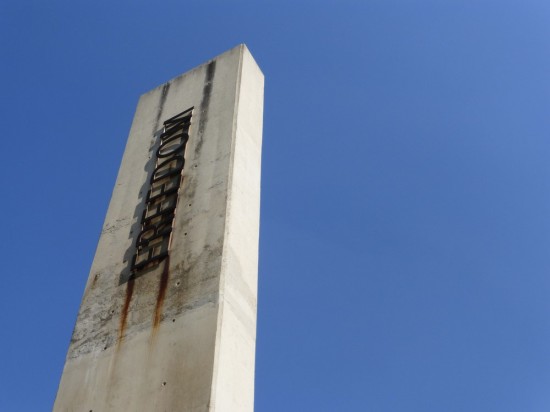 In the end, every person just wants to be free to live their lives and be happy.

Our original plan had been to ride straight to the museum, spend 2 hours exploring and then spend the remaining 2 hours (the last bus left at 5pm) visiting the other stops. Instead we realized as we emerged that we had spent close to 4hrs inside and were just going to make the last bus’s pick-up by 15 minutes. So, not only were we totally spent, but we weren’t going to be able to visit any of the other sites. So basically we had paid $20/per person for a really fancy ride to the Apartheid Museum :). Oh well, I guess we’ll just have to come back.

We loved our time in Southern Africa and definitely plan on coming back to do more exploring! Now it was time to move onto our next country, Turkey, but first we needed to do a little celebrating: It’s our 6 Monthaversary!!