(NOTE: While I feel weird calling Johannesburg ‘Jo’burg’, since I normally consider tourists/travelers adopting local names douchey, it’s impossible not use the nickname. EVERYONE calls it that and you actually seem like a bit of a tool if you insist on using the full name, although I can’t bring myself to call it Jozie) 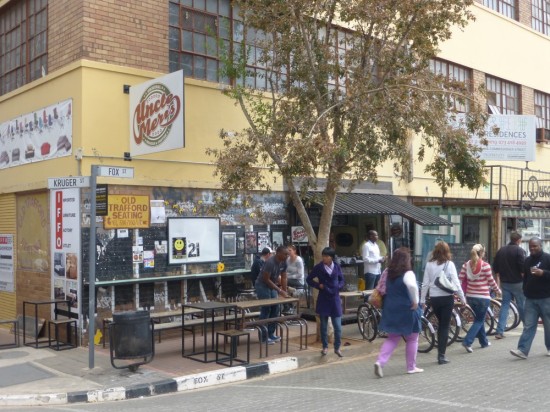 The main road in the Maboneng Precinct that led to the Market on Main was lined with tons of trendy shops and cafes.

Following our amazing 20 day road trip adventure through Namibia on our way to Victoria Falls we arrived in Jo’burg on June 28th. Following the recommendation of our amazing Airbnb hosts, Patrick and Marie, we decided to spend the morning exploring the Market on Main. The market, which is held every Sunday, is setup in the Arts on Main space downtown, a funky converted warehouse filled with shops and galleries. As we first arrived into the Maboneng neighborhood it reminded us of the U Street neighborhood in Washington, DC. Definitely ‘up and coming’ and quickly being gentrified by yuppie hipsters. Although instead of old row houses, the buildings being converted here were all warehouses. While I’m not sure it’s the neighborhood we would choose to live in (although we loved all of the cafes and boutique shops), it was definitely a fun place to explore on a Sunday afternoon. 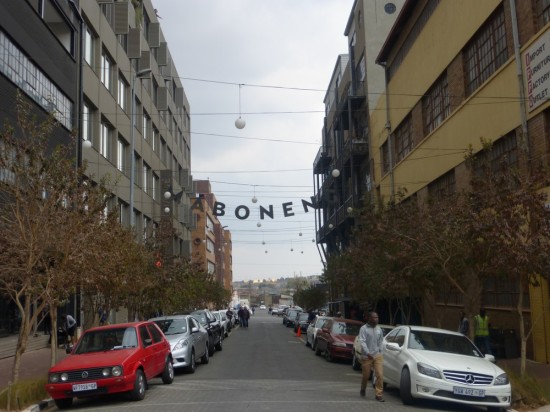 For better or worse, the Maboneng Precinct is definitely ‘up and coming’!

After parking, with the help of one of the local attendants, we headed down Fox Street to see what the market had to offer. Here, after 6+ months of travel was where we made a hugely rookie mistake. We realized that we had very little cash and knew most of the vendors wouldn’t take cards, so we needed to make a quick ATM stop. I stood guard with my back to the machine, as Adam completed our transaction. I realize this may seem like overkill but in a city with a reputation like Jo’burg’s I always err on the side of ‘better safe than sorry’. Just as we finished up and began to walk away the man who had been in line behind us began calling out for our attention. Assuming we had just left our receipt (which is some cases includes your name and ENTIRE account number, because where’s the danger in that?) we turned around to see what he wanted. This is where shit got weird and our travel (or really common sense) instincts totally failed.

He began insisting that we hadn’t completed our transaction and that we needed to put the card back in and finish. We kept insisting it was fine, but he kept pushing. Finally, I’m not sure why exactly probably a combination of confusion and frustration, Adam gave in and put the card back in the machine. Immediately the guy began pushing buttons and saying things like “see, so now you hit cancel” as we bewilderingly looked on. Adam, now more annoyed than confused and realizing that at the prompting of a stranger he had just put his card into an ATM, began hitting cancel over and over, while the guy kept hitting the help button. They were going back and forth, Adam insisting the transaction had been completed and the other guy just repeating “no, you have to hit cancel” and both of them frantically hitting buttons. Then the guy hit the ‘lost/stolen card’ button and my heart stopped – we were screwed. The machine then asked for the mobile number assigned to the card, which of course we didn’t have because it’s not a local card. Unfazed the man kept smiling and repeating “see, now you just enter your number” I was sure Adam was going to punch him in the face, but instead he just yelled back “we don’t have a number, it’s not a local card”.

While the whole thing probably only took two or three minutes I felt like everything was going in slow motion. The moment Adam put the card in the machine I thought to myself “well, we’ve been on the road for 6 months, so I guess it’s about time we got robbed” followed quickly by “at least he doesn’t have a weapon”. Although, as I watched the situation unfold I became more and more confused. If he was robbing us, why wasn’t he robbing us already? Why would he hit ‘lost/stolen card’ instead of just demanding that Adam withdraw money?

Finally another man approached from across the street. We were probably making quiet a scene after all, two tourists yelling at a local guy at an ATM. He asked me if everything was ok and I calmly explained what had happened. By this point Adam had grabbed the phone and walked away from machine, assuming, now that the machine had been told the card was ‘lost/stolen’, the card was locked inside. So I walked up to the keypad figuring I couldn’t do any more harm. The newest guy stood between me and the crazy man who was still insisting “you just need to finish the transaction”, and I just began hitting ‘cancel’ over and over. Finally the card emerged! I thanked my body guard, grabbed Adam and continued on to the market. 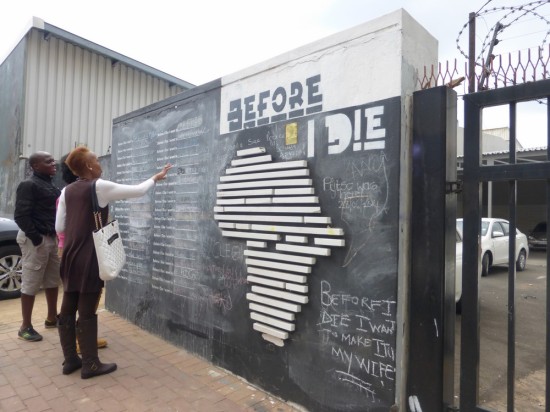 We found a ‘Before I Die’ wall on the walk to the market. I normally love these things, but the graphic messages written on this one left something to be desired.

We immediately began debriefing and tried to figure out what had just happened. Had the guy robbed us? Was everything still in my purse? Was he just crazy? Was it some kind of elaborate card swiping scheme? Wait, were we or were we not just robbed? We had no idea and the whole situation left us totally confused. The one thing we could agree on was that we had been idiots to allow a stranger to talk us into putting our card back in the machine. What were we thinking? It’s not like we’re new. It’s not like we don’t know how ATM’s work. Clearly we had lost our minds for a moment and hoped that we wouldn’t pay for the mistake later. (FYI: It’s been 4 weeks and our funds are intact, so I think the final verdict on the man is ‘crazy’). 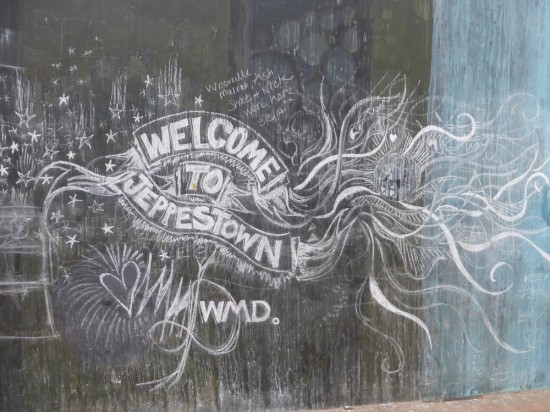 On almost all of the buildings on the way to the market we found great street art.

A little shaken (and Adam feeling stupid and disappointed in himself) we continued onto the market. All ATM craziness aside, it really was a great place. Once inside we could have been anywhere in the world. The crowd was a mixed bunch of young and old, hipster and yuppies. It was the first place we’d been to in South Africa where races of all kind could been seen, which again reminded us of Washington, DC. It had a similar feel to Eastern Market, but with less art stalls. The main floor was filled with food vendors (think food trucks, but booths) serving everything from traditional African cuisine to tacos. We split a grilled chicken sandwich topped with avo (because full words are too much trouble in SA) and rocket (arugula). Adam tried one of the local beers and I had a lemonade with fresh mint (yum, yum!). We ended the meal with a delicious choco (again, why not chocolate?) brownie before heading off to explore the rest of the market. 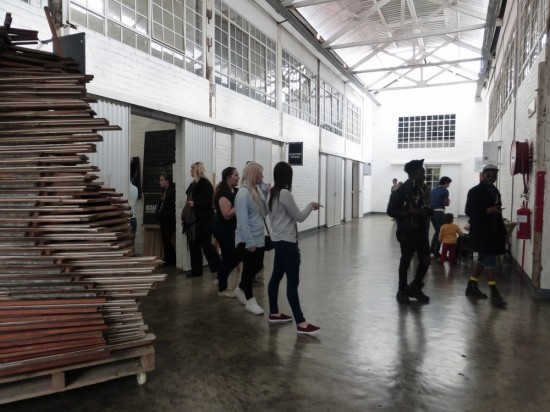 As we entered Market on Main we came across a local brewery’s storefront. Unfortunately we were too late to try the Bourbon/Vanilla porter…it was only noon and they had already sold out! 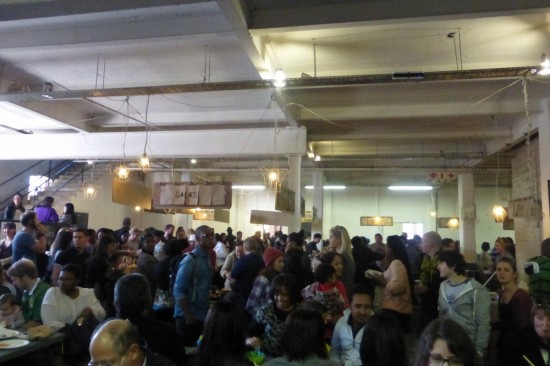 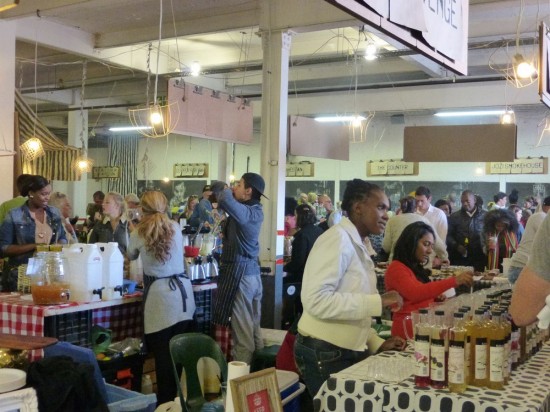 We wandered for a bit, everything looked so good and we couldn’t decide! 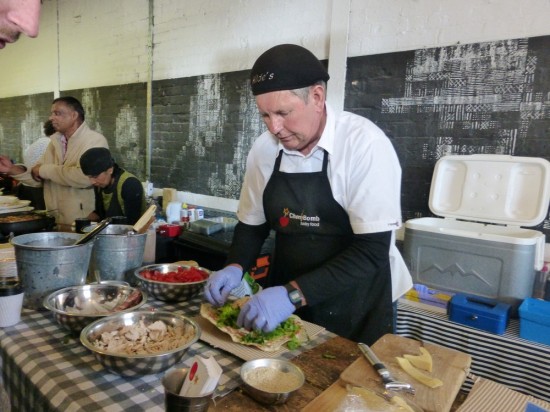 As Adam went in search of beer I got in line for the flatbreads, but once I got to the front he was all out. We were just striking out all over :). 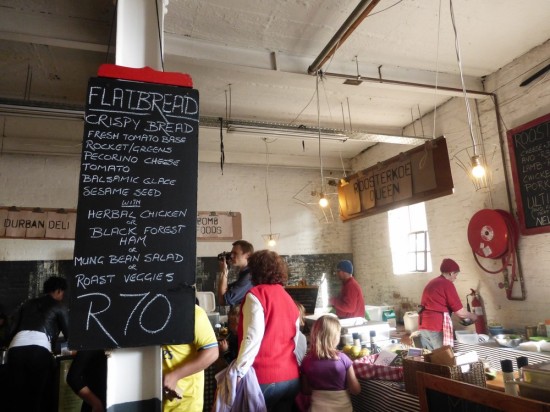 Luckily Adam had better luck and ordered a chicken sandwich from the next stall. After learning that I struck out with my flatbread he kindly offered to share. 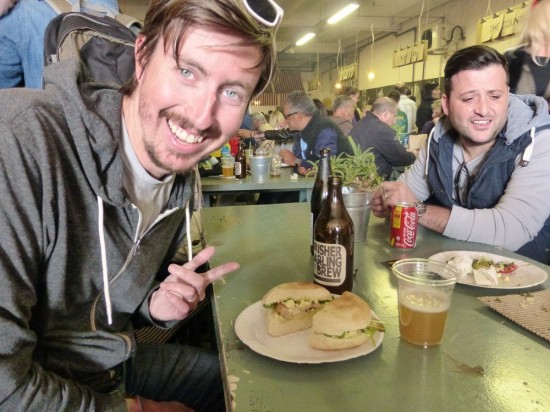 All it took was some tasty food and delicious beer and Adam’s spirits lifted. 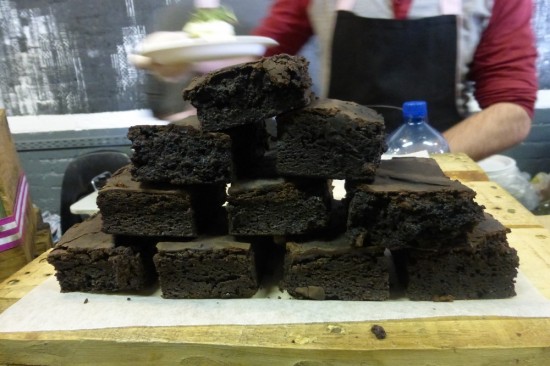 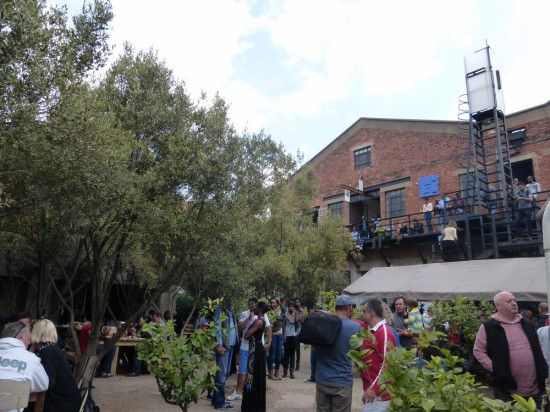 After we ate we decided to explore the rest of the market. 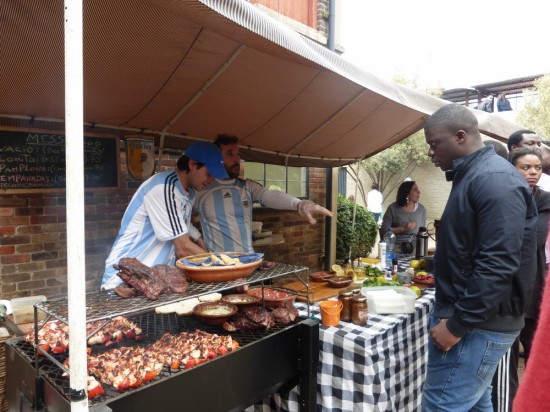 Even in the rear courtyard vendors were grilling up deliciousness 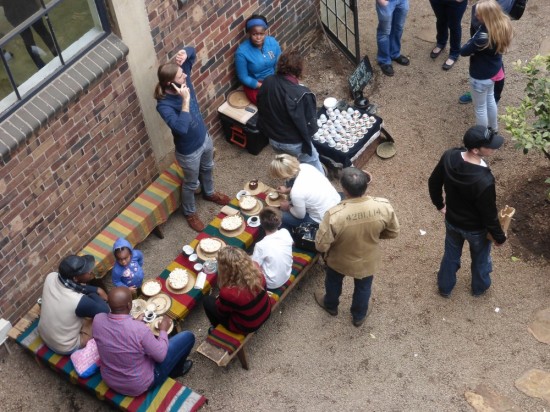 There was even a woman selling Ethiopian tea 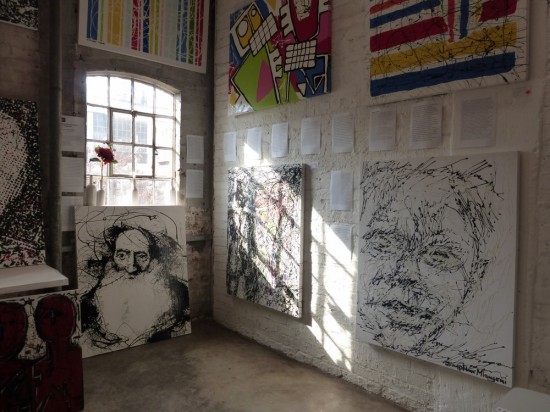 Back inside, on the second floor we found many galleries and boutique shops. 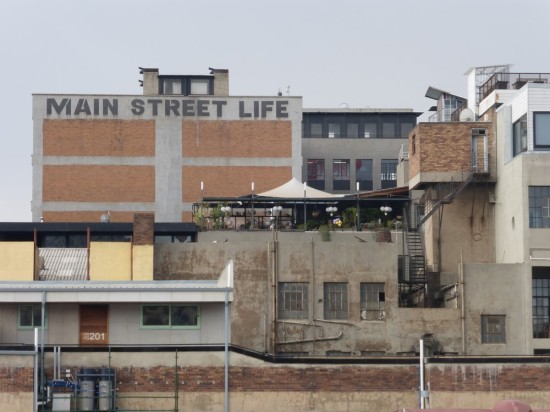 The view from the second floor balconies.

Overall, ATM experience notwithstanding, we really had a great time at Market on Main. Being on the road so long often makes us feel isolated and sometimes stuck on the ‘backpacker trail’, so it’s nice every once in a while to get a break and do something truly local. Plus, this would totally have been the type of thing we would have done in our normal life so it served as a lovely reminder of what’s waiting for us back home at the end of the rainbow.

Next stop in Jo’Burg – The Apartheid Museum by HoHo