Victoria Falls: The Smoke That Thunders

The drive from Swakopmund to Victoria Falls, Zimbabwe, is about 1,000 miles. We covered it in a few days, stopping along the way to sample bits of central and eastern Namibia. We went to a Living Museum outside of Rundu, stopped at the largest known extant meteorite on Earth, and slept alongside a river across from Angola. These things were amazing, but we kind of rushed it. We had a tight timeline to return the camper in Johannesburg and we didn’t know how long it would take to get from Victoria Falls to Joburg, nor did we know how much time we would want to spend at the falls. 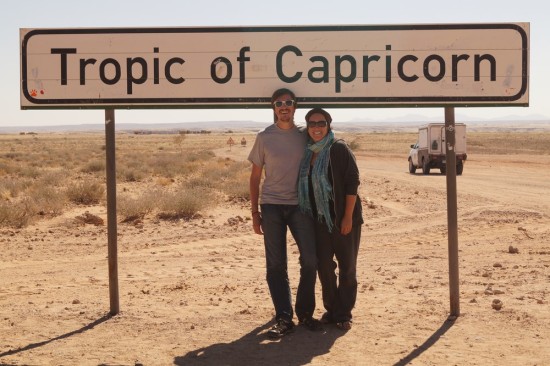 We drove northward into the tropics, crossing the Tropic of Capricorn. 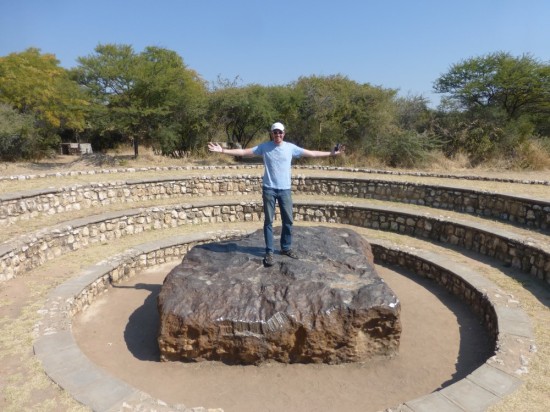 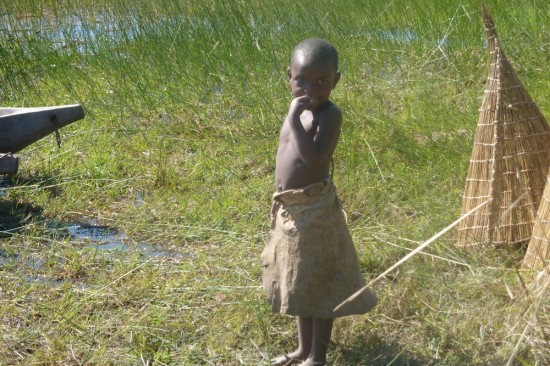 A child at the “Living Museum” outside Rundu. 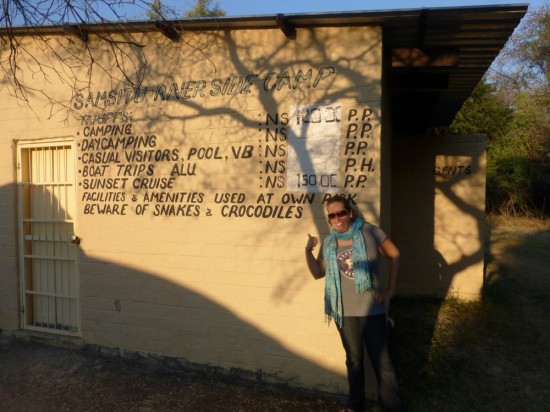 Danielle super thrilled about the prospect of snakes and crocodiles at our campsite across the river from Angola.

So we made a few token stops, but we mostly drove. We saw lots of wildlife along the way just hanging out on the side of the road: zebras, elephants, giraffes, gemsbok, springbok, kudu, painted dogs, and more ostriches than we could count. The drive was wonderful and while the scenery wasn’t as captivating as southern and western Namibia, it was nothing to shake a stick at, either. We crossed through Botswana for a couple of hours, and then headed into Zimbabwe where we planned to stay for 2-3 days and visit Victoria Falls.

The next day we headed out to the falls bright and early. The leisurely walk from our campsite to the entrance to Victoria Falls National Park took only 20 minutes, but on the way we encountered some wild elephants.

This is one of the things that makes southern Africa special – even in this extremely touristy, fairly developed area, there are still wild elephants just walking around like they own the place (and, in fact, owning the place). It’s something you don’t get anywhere else in the world. We didn’t spend too long admiring the elephants; after all, we still had the world’s largest waterfall to experience – the elephants were, incredibly, just the amuse-bouche.

We continued down the path and rented raincoats for $3 near the entrance to the park. You need them because even though the area is classified as “Mopane woodland savannah”, the ecosystem in the immediate vicinity of the falls is an actual rainforest – the falls kick up that much spray. Before entering the park, we went to the bridge that spans the Zambezi river just south of the falls. During low water season, you can see the falls clearly from the bridge, but were there during high season so the views weren’t as good. The bridge is also home to a bungee-jumping station and a “swing” which you can harness yourself to, then jump off the bridge and swing out over the gorge before being pulled back up. We stayed on the bridge and at the nearby café watching people jump and swing for over an hour, it was great fun.

Too chicken to try it for ourselves, we eventually crossed the bridge again and entered the park to see the falls. The main gorge of the falls is more than one mile long, so we entered at the eastern end and started walking west. I don’t have the proper vocabulary to describe the falls: stunning, beautiful, powerful, thundering, amazing, incredible, if you put all these words into one word and gave it a hit of awesomeness, you’d be about halfway to describing it. Our jaws were on the floor for the entire time as we alternately took pictures and then protected the camera as the winds shifted and we were caught in an impromptu downpour of spray. 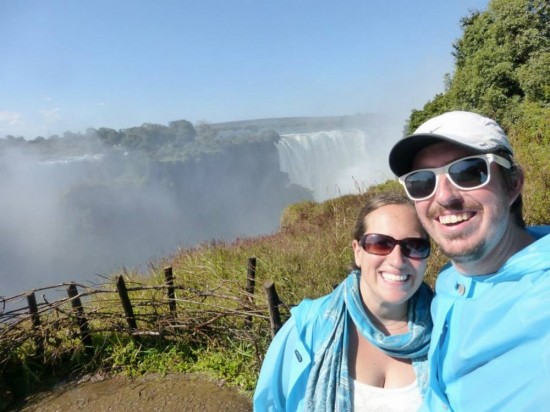 Selfie in front of the gorge. Maybe 30% of the falls are visible here. The primary gorge is over a mile long. 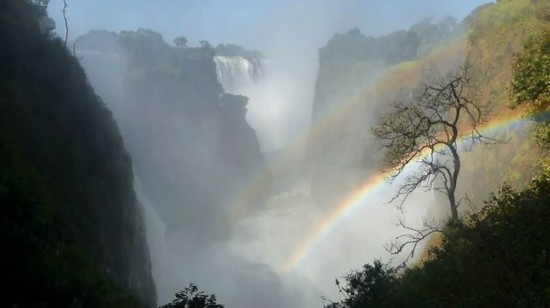 Double rainbow visible in the mist, looking westward through the gorge from the Zimbabwe side. 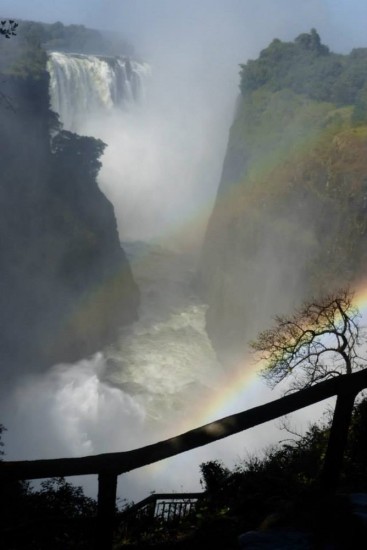 Another shot from mostly the same spot. 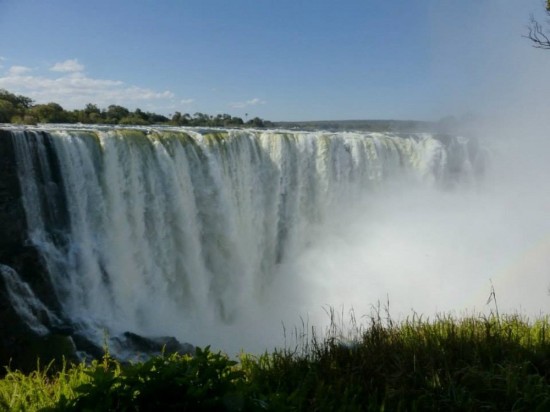 The best vantage point for the main falls, near the center of the primary gorge. We had to wait until the wind shifted and sent that huge cloud of spray away from us.

We stayed as long as we could, but we eventually had to leave because we had booked a sunset cruise on the Zambezi River, just upstream from the falls, on the Zambezi Explorer. The Explorer is one of the nicer boats that plies this route (there are at least 15 boats), and we were hooked when the woman selling the tickets mentioned sushi. The cruise is two hours, at sunset, and includes an open bar and passed hors d’oeuvres. Our luck from Swakopmund followed us, because the boat holds 100+ people but only 8 of us had signed up this particular night. There were 4 bar/server staff and eight of us up on the top deck relaxing, chatting, and taking in the evening.

Danielle had a glass of wine like a responsible adult. The four other adults (including me) proceeded to get absolutely smashed like we’ve never seen an open bar before. We all had a wonderful time and we got to see some hippos and elephants while cruising down the river, but for the most part, we were just drinking and talking. At some point, I saddled up to the bar to talk to the staff and got to talking to one of them in particular, Bheki, who said he had a couple days off coming up this week. I asked what he does on his days off, and he said he goes to his village about 20k out of town to visit his family. After a few minutes of talking, I successfully secured an invitation for Danielle and me to join him when he goes next, in two days time. Embarrassingly, that’s about the last thing I remember. 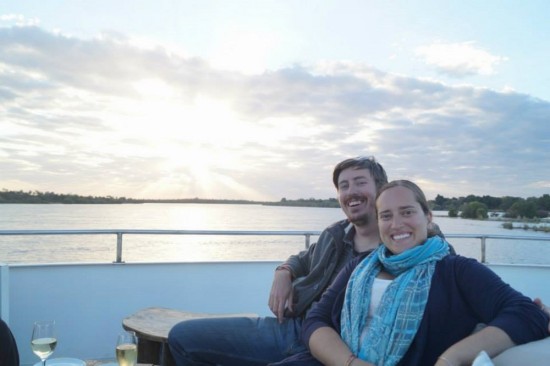 At the start of the cruise, on the Zambezi river. 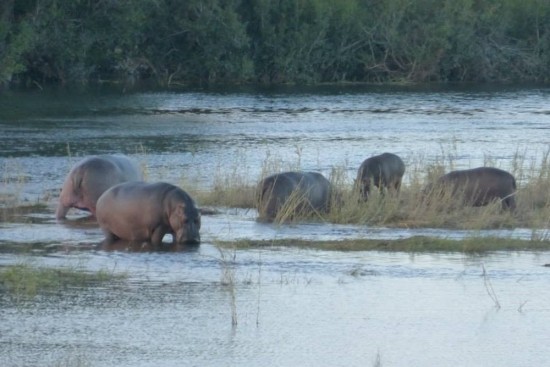 Hippo family on the Zambezi River, as seen from our boat. 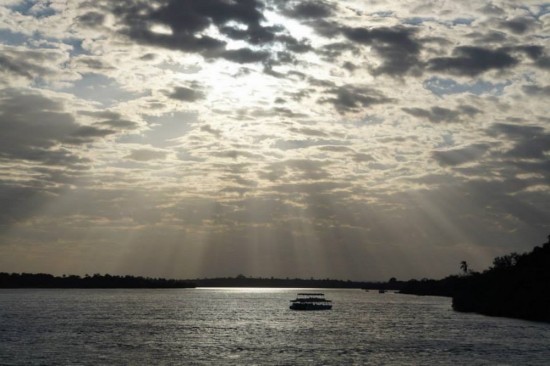 Sunset begins over the Zambezi with another boat visible in the foreground.

We had told Bheki that he could meet us at our campsite the day after next and we’d follow him to the village. We didn’t know what to expect, and we didn’t even know if he’d show. But at 10:30am on the dot, he strolled into the front gate of our campsite and, looking a little surprised that I recognized him (he later confessed “I wasn’t sure if you would remember me, you seemed like you might have been drunk”), we greeted each other and it was goodbye, Victoria Falls, hello Chidobe Village.

We’re still catching up on the blog, so the Chidobe Village post will be coming along shortly. However in the meantime continue following along with our trip: I Don’t Think We Were Robbed in Jo’burg (?)

← Southern Africa Road Trip: Swakopmund
I Don’t Think We Were Robbed in Jo’burg (?) →