“Why don’t we just drive from Cape Town to Johannesburg and visit Victoria Falls along the way?”

We had originally planned to spend our full 6 weeks in South Africa, but after talking with a number of other travelers we knew we had to include Namibia and Victoria Falls into our plans. Being on a tight budget we couldn’t afford an overland tour and the flights were out of the question, so a self-drive was our only option. Driving through Southern Africa would be easy enough, right? Well let’s consider these points:

So once we took all of that into consideration and realized that not only was this pretty far outside of our comfort zone but we were totally unprepared for a trip like this there was only one logical path forward…take the trip of course!

The moment we booked our truck I was terrified that we had just set ourselves up to become a tragic story. I could see the headlines now “RTW American Couple Found Dead in the Middle of the Namib”. Our friends and family would be interviewed and the unanimous conclusion would be that we were not the kind of people that ventured off into Southern Africa, with no plan or set itinerary, to camp our way to and from Victoria Falls. But I’m happy to report that we not only made it out alive (thank you Ms. Obvious), but that we had the most amazing time! 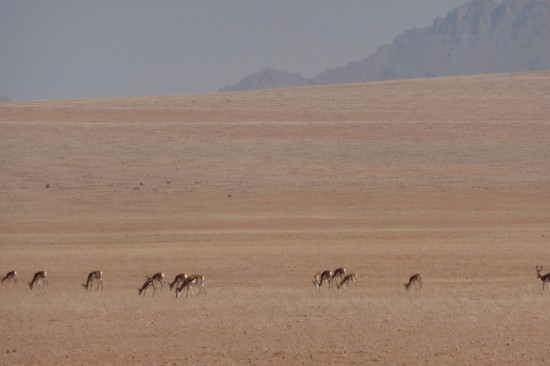 The drive through Namibia was one of our highlights of our whole trip to date!

Namibia PSA:For the record Namibia is amazing! You’d think being the “2nd Least Densely Populated Country” would be a negative but it creates an otherworldly feeling. The locals and other travelers were some of the friendliest people we’ve ever met (with the exception of the 20-something bus overlanders). Everyone was laid back, friendly and eager to swap stories. Not surprising in a place where you can drive 250kms without seeing any sign of human life. Plus the scenery, which dramatically changes every 200kms, is breathtaking. We drove through prairies, mountains, deserts and sand dunes on our way to the ocean in just the first 4 days! Seriously, if you have a trip coming up we STRONGLY urge you to visit Namibia!

As I mentioned, we had no real plan heading into the road trip. We only knew two things 1. We wanted to see Victoria Falls and 2. The truck had to be returned in Jo’burg on June 28th. So with that ironclad itinerary we planned to set off on June 9th from Cape Town. 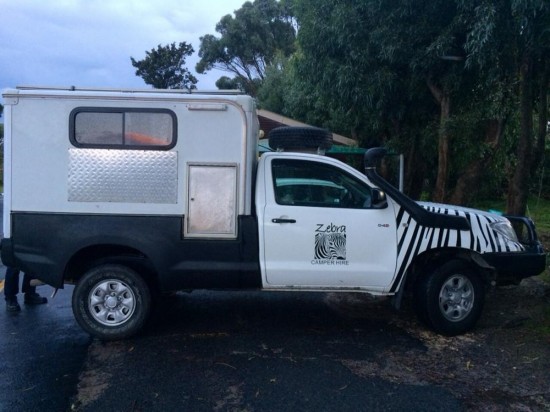 This was going to be our home for the next 20 days.

After lots of online research and price comparisons we had decided to go with Zebra Campers and their Toyota Hilux Trax. True to form we had selected them because they were a locally owned, small company and we felt like it would be better to support their business rather than go with the big international companies. Despite finding few reviews online we had gotten a good feeling from the owner, Guy, who had been super responsive via email and even offered to discount the rental. We quickly learned that in this case it would have been better to go with one of the ‘big guys’.

From the start on the morning of the 9th things weren’t going as planned. We were running late for everything (including our Yellow Fever Vaccine appt), the weather was horrible (yay, more rain), traffic was miserable (Hey, Cape Town, rush hour should not start at 3pm!) and we got lost trying to find the campsite where we were meeting the Zebra Camper people. By the time we arrived at 5:30pm (1.5 hrs late) we were frustrated and tired.

We immediately began apologizing to Guy and Lizle but they were super understanding and, Lizle especially, put us at ease. She quickly got all the paperwork out and started walking me through the forms as Guy took Adam to check out the camper. As if the traffic and weather weren’t clear enough signs from the Universe that we shouldn’t have gone with Zebra, it decided to send us a crystal clear message. When he went to unlock the back it wouldn’t open. The door to the camper, which housed our sleeping area, kitchen and all of our storage, was jammed shut. They tried everything and it wouldn’t budge. After a while they sent us to have dinner and said they would call us when they had figured it out. So nervous, but hungry, we headed off with SueAnne and Terry. 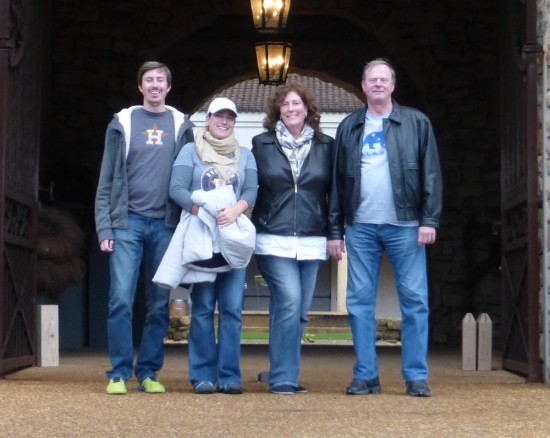 Adam’s mom SueAnne and her husband Terry came to visit us in South Africa. We promise we’ll post about that soon!

We had just ordered when Guy showed up. He told us that they got the camper unlocked and had driven it over so we could finish the process. This was annoying for a few reasons. First, the whole reason we had asked to meet at a campsite was because we weren’t super comfortable driving the truck (especially at night, in the rain) and wanted to be able to take our time in the morning figuring it out. Second, because our food was on the way we felt rushed and therefore didn’t have the opportunity to ask all of our questions or ask for demonstrations regarding setup. If we would have received those demonstrations we would have learned, before it was too late, that the rain cover was missing pieces (did I mention it was raining?), the sink was broken and the ‘outdoor shower’ was nonexistent. Finally, when they said they had ‘fixed the lock’ what they meant was that the lock was broken and a piece was sticking so they just removed it all together – that’s not the same as fixed in my book. So now the only way we could lock (sort of) the camper was using the generic metal T-tool that EVERYONE ELSE WITH A CAMPER would have. No biggie, we are only carrying around everything we own with us. We also found out at this time that the ‘included GPS’ had not been brought because we didn’t request it. Here’s how the conversation went:

Me: So where is the GPS?

Guy: You didn’t tell us you needed a GPS so I left it in Jo’burg.

Me: But it’s listed on your website as an included item, so I didn’t think we had to request it.

Guy: Included just means we don’t charge for it, but you have to request it.

Me: So wait, are all of the other included items in the camper, like the pots, sheets, towels, etc or did we have to request those as well?

Guy: No, they are all there. They’re included as part of the rental.

Me: <Befuddled look…crickets> So is there any way to get the GPS?

Guy: No, it would cost more than the GPS to ship it to you. Most people just use their phones

And that was pretty much the end of it (we ended up buying one for $189, thanks Guy!). If I had been thinking clearer I would have said that based on the broken door, no GPS and missing items (assuming we had known about them) we either needed another camper or a refund. Sure, it would have set us back a day or two, but this was an expensive rental and clearly Guy didn’t give two shits (this became even clearer when we asked for clarification on the gas tank and his response was literally “I don’t know what to tell you?”). But I wasn’t thinking clearly so we signed the papers and waved goodbye as Lizle and Guy left us in the restaurant parking lot, in the rain, with our manual transmission camper.

Luckily, with the exception of a flat tire on day two, it only went up from there… 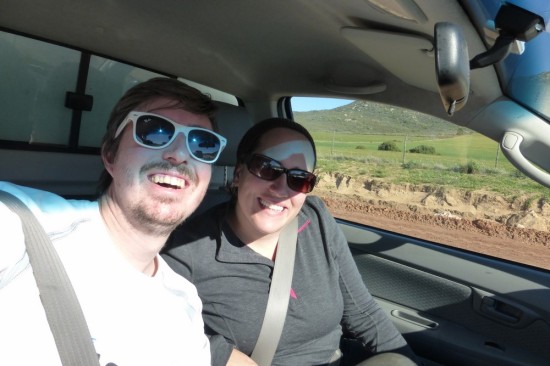