This portion of our trip was ‘sponsored’ by Susan and Terry Akers. Thanks for everything, guys!

After a few days exploring the southern outskirts of Cape Town, the four of us (Mom, Terry, Danielle and I) drove off to Stellenbosch, about 90 minutes east of Cape Town. Well, I say we all drove but Terry actually did all the driving, in a manual transmission car, on the left side of the road, in continuous rain (thanks again, Terry!) We rolled in to our rented apartment at a swanky golf resort just outside of town and got settled in. The plan for the next few days was to visit wineries (amusingly called “wine farms” in South Africa), visit a distillery, and play some golf. Unfortunately, the rain literally never stopped, and we didn’t get to golf (sorry, Terry!), but we did get to do the other things, and more!

Our first order of business was to get some food. Mom and Terry had come armed with several restaurant recommendations in Stellenbosch (which, not unlike Napa, has many fine restaurants) and we ended up at The Big Easy owned by world-class golfer and native South African Ernie Els. The food was outstanding – mom begrudgingly had her first taste of ostrich and was instantly a fan, Danielle and I split springbok Carpaccio which was delicious, and I had the best ostrich steak I’ve ever had in my life.

Our stomachs full of a delicious gourmet lunch, we sped off to Waterford Estate for a wine and chocolate tasting. We have been to several kinds of wine tastings and pairings, but never chocolate and wine, so we were pretty excited. Not as excited as my mom though, because I’m pretty sure she would opt to live off of nothing but wine and chocolate if such a thing were possible. The grounds at Waterford are well-kept and imposing, just what you want with wine tasting – an air of oligarchy and pretension (I’m being serious). We were ushered in and shown to a nice cushy couch around a small wooden table, and presented with the opening salvo of the day: four wines to taste, sans chocolate. With that out of the way, we were presented with the main event: the final three wines and the paired chocolates. 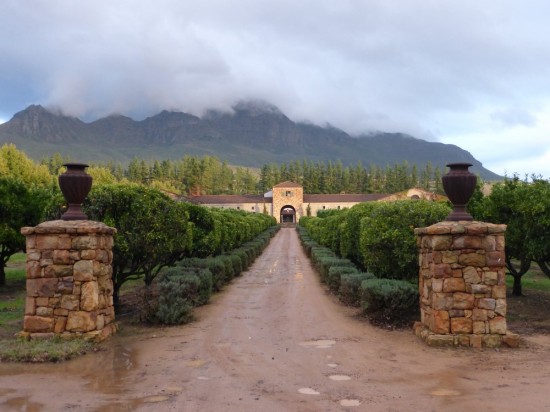 The entry driveway to Waterford. Impressive and beautiful. 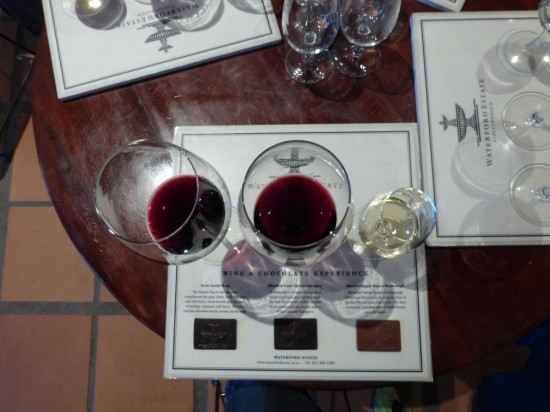 The wine and chocolate pairing. Two reds and a dessert wine, each with their own little rectangle of chocolate. 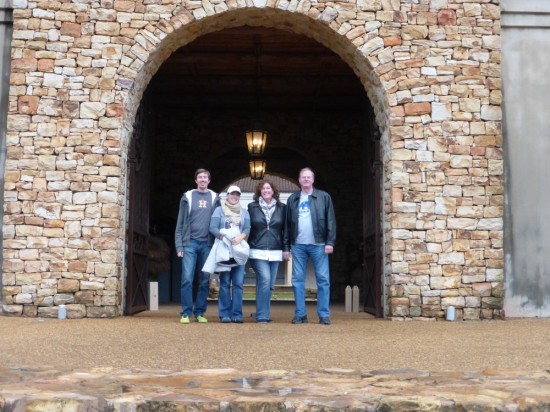 The four of us outside the winery afterward.

The idea here is to taste the wine alone, then have some of the chocolate, and then taste the wine again to see how the wine changes. Each wine was presented with a different kind of chocolate, all specially made for this purpose. The wine was good, as was the chocolate, but honestly I didn’t find that the chocolate did much in terms of changing the wine. That said, I certainly wouldn’t say “no” if the same setup was put in front of me again. Danielle disagreed and found that the final wine (a dessert wine) paired with the caramel milk chocolate was amazing. If she could survive off of nothing but the wine and chocolate, some of my husbandly duties would be unnecessary.

Our second day in Stellenbosch was to be golfing day. As I mentioned, the weather didn’t cooperate, but we spent the first half of the day lounging around the apartment and watching the weather, hoping for a break in the rain. It never came, and so we set off to do some more drinking. This time our destination was a brandy distillery called Van Ryn’s. Here, we took a brief tour of the distillery which I thoroughly enjoyed (despite having had about 1,000 gallons of bourbon in my life, this was my first distillery tour). We then sat down for our chosen tasting: brandy with chocolate and coffee. The theme here was similar to yesterday: see how the chocolate and coffee impacts the flavor of the brandy. 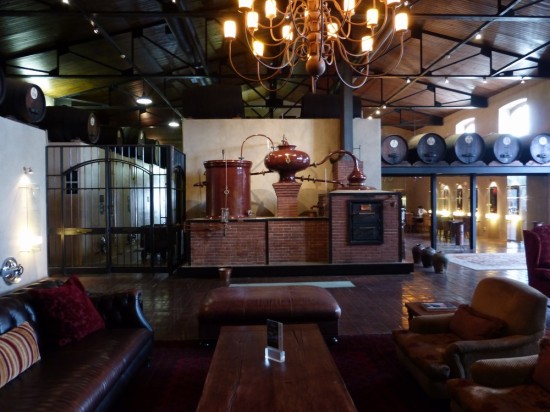 The lobby of the distillery. 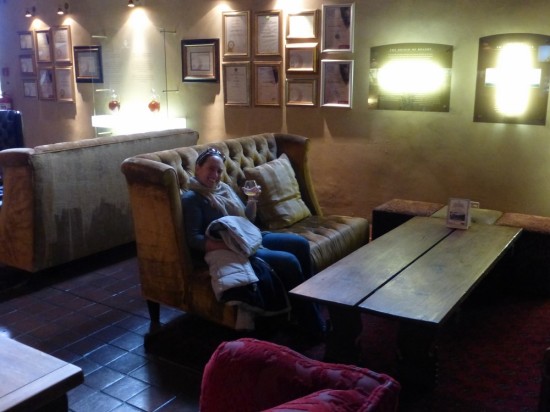 Danielle doing her best to fit in, sipping brandy and sitting in a leather-backed chair. 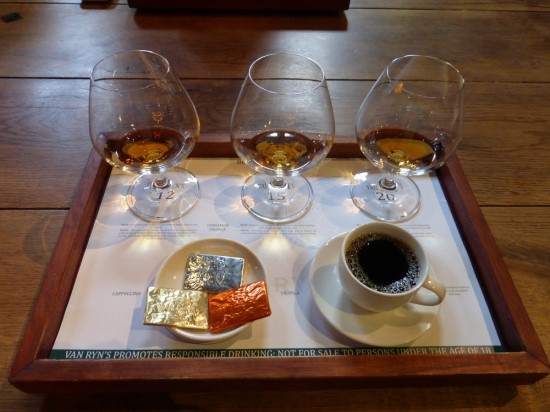 The brandy and the three chocolates, plus the small cup of coffee.

I don’t think any of us were particularly enamored with the brandy, but we all agreed that the 20 year aged stuff was the best. Unsurprisingly, it was also the most expensive and sold out. Mom and Terry settled for a collector’s edition box that contained small bottles of all four types of brandy we sampled, and then we hurried out the door to neighboring Spier where we heard we could taste wine and pet cheetahs. This is not a joke. 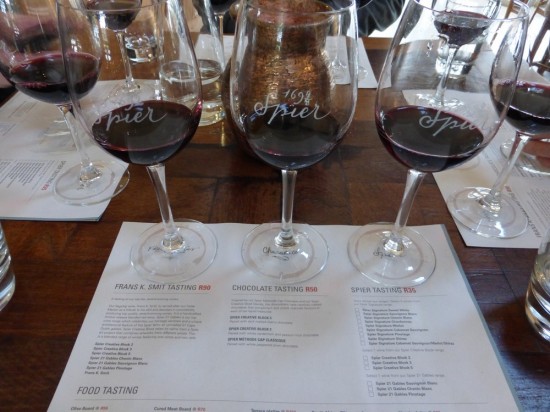 The reds at Spier. 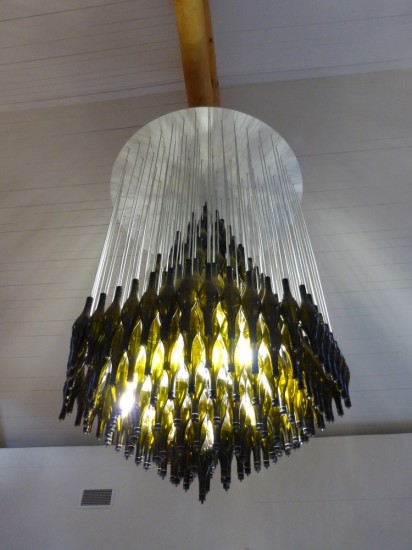 Awesome light fixture at Spier made of used wine bottles. 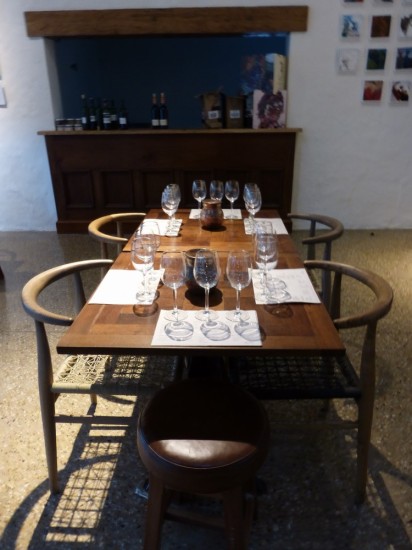 The tasting room at Spier.

Sadly, it was nearing the end of the day and the cheetahs were unavailable to us so we all sat down to drown our sorrows (except Terry, who had to drive – sorry, Terry!) We had a bunch of white wines which are typically not my favorites, but there was one, a chenin blanc, that all of us loved. It was also only about $4 per bottle, so obviously, some was purchased to take back to our apartment. We then went through the reds, none of them remarkable although they have a line of red wines called “Creative Block” where their winemakers just experiment with different blends. Those were some of the best reds on offer, and were pretty interesting in that they are experiments so they are not the same from year to year. Just before we left, Danielle pulled a bit of “wink-wink, nudge-nudge” and got our server to pour her a glass of the expensive reserve wine that was not supposed to be part of our tasting. Sly.

After a good night’s sleep, we left Stellenbosch the next day but not before making one final stop, this time at Simonsig. Known primarily for their sparkling wines, they have several good reds and whites as well, and mom and I saddled up to the bar and ordered the big kahuna: a 9-wine tasting. Terry (driving) and Danielle (not a morning drinker – whatever that means) just had a couple sips off of our wines which wasn’t a big deal because the amount of wine poured for our “tasting” was unreal. Our 9 tasting portions likely equated to 5-6 full glasses of wine.  Beyond the strong pours, the staff there were friendly and fun to talk to – a brother and sister that we had a great time chatting with. The brother, incidentally, looks a lot like Dawson from Dawson’s Creek. 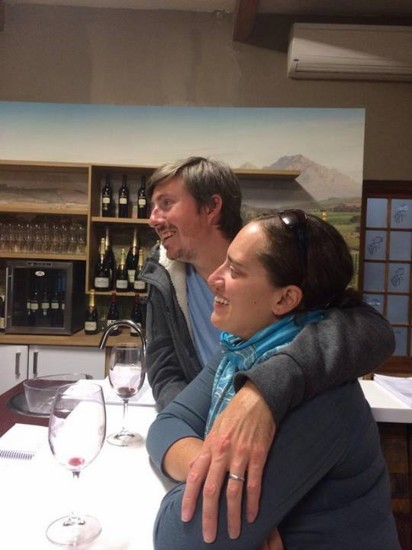 Danielle and me at Simonsig, chatting with the staff. I don’t know why my hand looks freakishly large and far away from my body here, but it does. 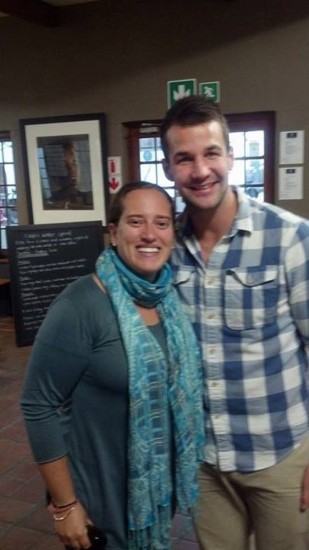 Nearly drunk from our tasting, mom and I stumbled back to the car and we headed back to Cape Town for the final leg of our family adventure. Next up: Cape Town – In Which We Appreciate Chocolate

Interested in wineries throughout the world? Be sure to check out our post on India’s Wine Country.

← South of Cape Town: Gardens, Cliffs, and Penguins, Oh My!
Cape Town: In Which We Appreciate Chocolate →