South of Cape Town: Gardens, Cliffs, and Penguins, Oh My!

This portion of our trip was ‘sponsored’ by Susan and Terry Akers. Thanks for everything, guys!

Our time in greater Cape Town was split into two parts: for the first 4 days, it was just the two of us. For the next 9 days, my mom and her husband Terry joined us. That seems like a natural way to split up this blog post, so I will!

Juuuuuust the Two of Us

We arrived in Cape Town in the early evening after a 30 hour train ride on the Shosholoza Meyl from Johannesburg. It took us a while to figure out how to get a taxi, but with the help of a friendly woman we met in the train station, we grabbed a cab and headed to the Greenpoint neighborhood to our hostel. The B.I.G. Backpackers, where we stayed, was awesome. It’s probably tied with Riad Baraka in Chefchaouen, Morocco for the title of “Adam’s Favorite Accommodations So Far”. It was spotless, the other guests were great, the staff was fantastic, the beer was cheap, they had a huge media room with tons of movies, and I simply can’t say enough good things about it.

We spent a lot of our first four days just hanging around the BIG planning our upcoming Southern Africa Road trip and resting up for the 9 days of adventure we were about to have with my mom and Terry, but we did manage to get out and explore the city a little. Our first taste of what Cape Town has to offer came courtesy of Cape Town Free Walking Tours.  Recommended by the staff at the BIG, the tour is free as the name implies, you just need to tip your guide. We turned up for the 11am tour, and it was just the two of us so we were treated to a free, private, guided walking tour. Excellent.

Tree-lined walkway alongside The Company’s Garden in down town Cape Town. 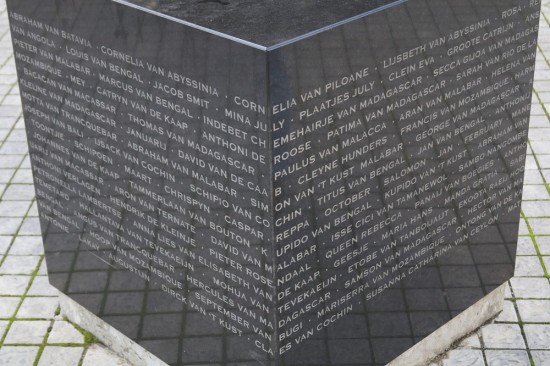 Slaves monument in Church Square, listing the names of slaves who were sold here. Given “western” names, many were named for the month in which they were bought. 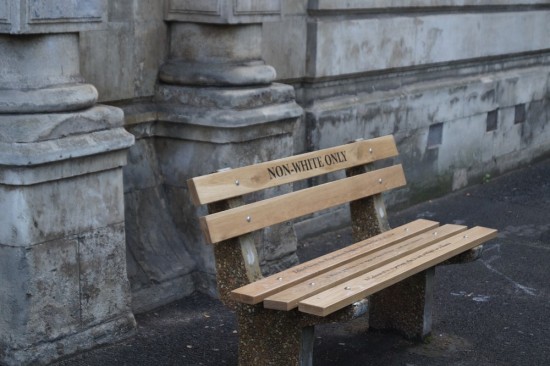 Part of the Apartheid Memorial outside the government building where racial ID cards were once distributed. There’s a “Whites Only” bench as well.

The tour was great – we learned a lot about Cape Town’s history, got recommendations from our tour guide for things to do and places to eat that many travelers miss out on, and got a good feel for how to get from point A to point B on foot. All of this would prove useful when mom and Terry arrived later in the week, but one recommendation in particular paid immediate dividends: the Eastern Food Bazaar, where we went for lunch right after the tour.

The Eastern Food Bazaar is basically a big food court with about 8 stalls, each serving a different “eastern” cuisine: Indian and Chinese mostly, but with some Middle Eastern food as well. The stalls are in one long row along the wall of the place, stretching for about 200 feet. We walked the length of the stalls, checking out the menus and the food, and then returned to the middle where a single cashier takes orders for all of the stalls. We ordered chicken shwarma and falafel with hummus, and then headed down to the Middle Eastern stall to pick it up. 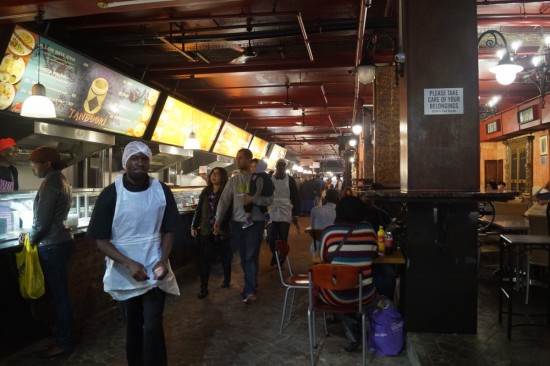 The Eastern Food Bazaar. Stalls along the left wall, seating to the right.

As you probably know, Danielle can’t eat onions or garlic, and since we were splitting the food, we had to decline the various sauces and condiments that came with the shwarma. The other people waiting for their food were very concerned on our behalf and kept trying to help us: “No, no, that sauce is free! You should take it!” along with assurances that the sauce was, in fact, good. Oh and it is free. You don’t have to pay for it. Free.  It’s free. After thanking all three of the bystanders who were trying to help us, we successfully made it back to our table without any garlic/onion-containing sauce on our shwarma. The food was delicious, and perhaps better, it was about $3.

The second tour we took in Cape Town was a tour of the Langa Township and a visit to a local non-profit called Happy Feet. That story is the subject of an entire post unto itself, but I will say it was one of the best experiences we’ve had on our entire trip and we highly encourage other visitors to take the tour.

On our last night before mom and Terry arrived, we went to a local bar that was hosting a “Bacon Fest”, a theme party with anything and everything bacon-related. There was bacon beer, bacon cheesecake, bacon brownies, bacon cupcakes, and of course, plain bacon. The food was actually a bit of a let-down, and the beer wasn’t great, but we met up with a bunch of locals through MeetUp.com and had a wonderful time. 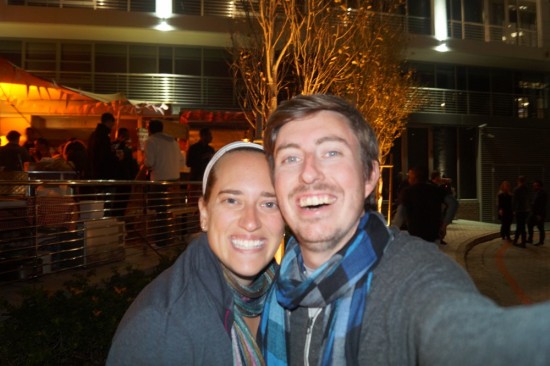 The two of us at Bacon Fest.

After a couple more days of being lazy, eating sushi, and hanging around the BIG, we had to say goodbye to all the wonderful people we had met at the hostel and head out to Hout Bay where we would meet up with mom and Terry. The Hout Bay Hideaway, where we were staying at for the first three days, is an upscale B&B with fantastic views and amazingly friendly hosts. Through the B&B, mom and Terry had arranged for a rental car so the four of us could explore  greater Cape Town over the next 9 days, and we wasted no time.

Cape Point is the southwestern-most point in Africa and is a gorgeous part of Table Mountain National Park where you can hike trails on the edge of 100 foot cliffs and peer down at the crashing waves below. We got some great weather (except it was a little cold and windy, it was winter after all), and spent a few hours hiking all around the point. Oh, and Danielle tried her hand at whale calling. 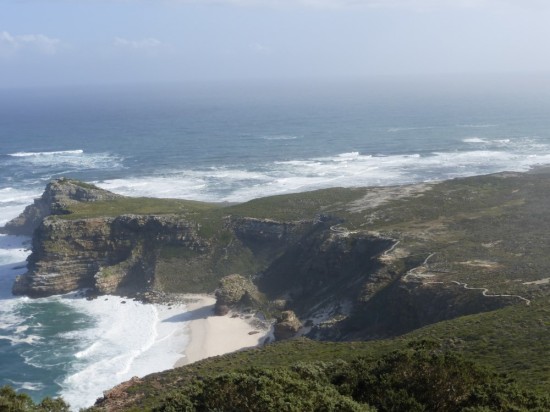 Cape point as seen from the parking lot. 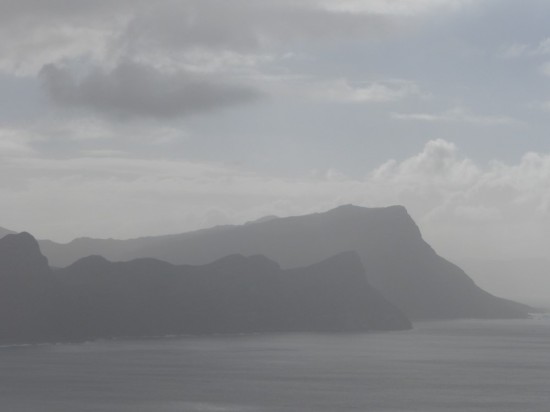 The view from the western cliffs of Cape Point.

After all that hiking and whale calling, we were pretty hungry, and we settled in for lunch at a seafood restaurant in the park. The area of the park near Cape Point is home to hundreds of baboons, and they can be pretty relentless when it comes to getting their hands on food. We were seated on the outdoor patio of the restaurant with a great view of the ocean, and there were only two others out there eating. After we placed our order, we noticed a large baboon jump up onto the patio. We had been told that the “baboon scarer” (an actual job that an actual person does) had left for the day already, so it was just the 6 of us and the baboon. We managed to scare him away a few times, but he kept coming back. At our waiter’s suggestion, we ended up moving inside.

As soon as we vacated our table, the baboon jumped up on it and went straight for the sugar that had been set out to accompany Terry’s coffee. This is now the second time on this trip we’ve seen a monkey steal sugar at a restaurant. 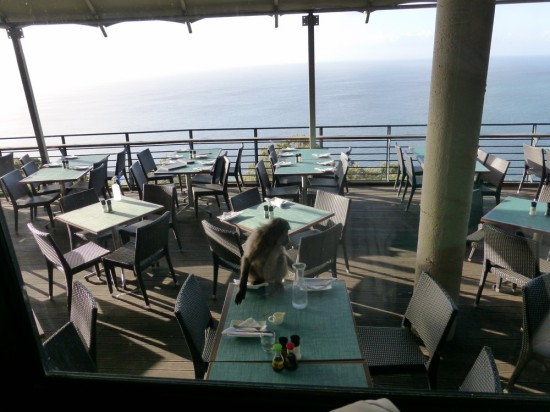 Thirty minutes southeast of Hout Bay lies a small stretch of beach called Boulders Beach. It’s a pretty unassuming little place with no sunbathers, no surfers, and no body-boarders. In fact, there are virtually no people on Boulders Beach. So why, you may be wondering, would we visit such a place? Well, there are over 3,000 of these little guys: 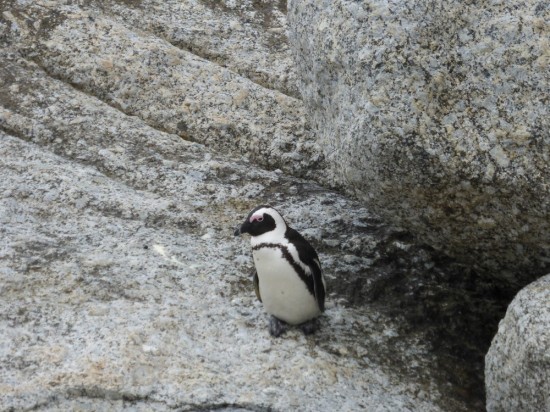 That’s right, Boulders Beach is home to a protected colony of wild African Penguins who took up residence on the beach in 1982 and have never left. We spent a good 90 minutes here just watching them and taking pictures. It was fascinating watching them waddle out awkwardly into the water and plop down, suddenly becoming fast and graceful as soon as they were submerged. Equally amusing was watching them come back in – body-surfing a wave and belly-flopping onto the beach, standing up, and then getting knocked over when the next wave came in. While we were there, it started to rain a little. The rain came down off and on for about 20 minutes, but we stubbornly refused to leave. We were rewarded for our dedication when, after the rain passed, we were treated to a gorgeous and long-lasting double-rainbow. 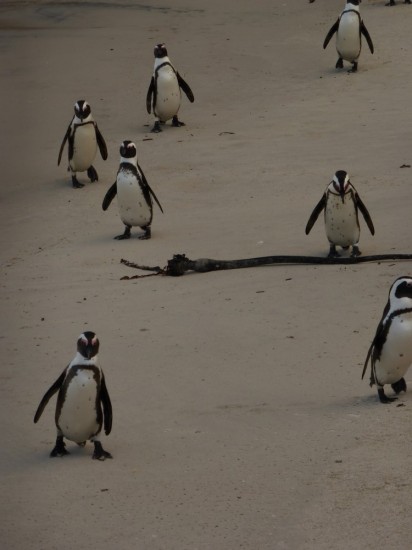 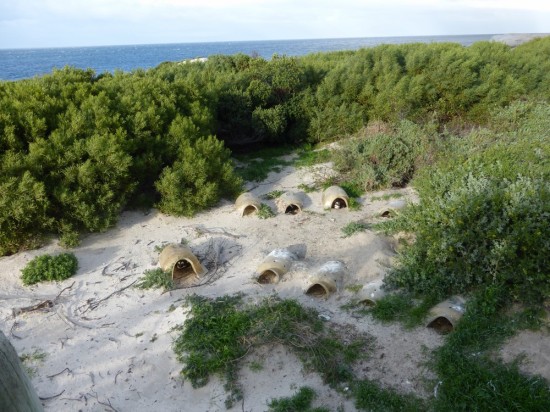 As part of the conservation effort (the African Penguin is endangered), these little penguin houses have been constructed everywhere. 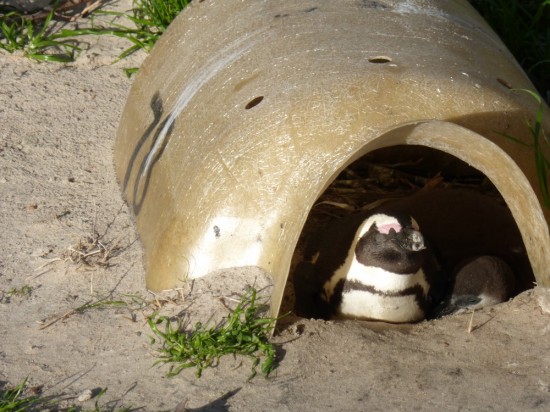 A close-up of a parent and it’s chick (barely visible) living in their man-made house. 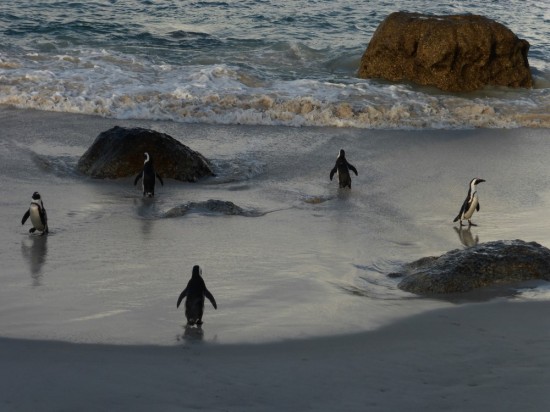 Penguins off to do battle with the surf. 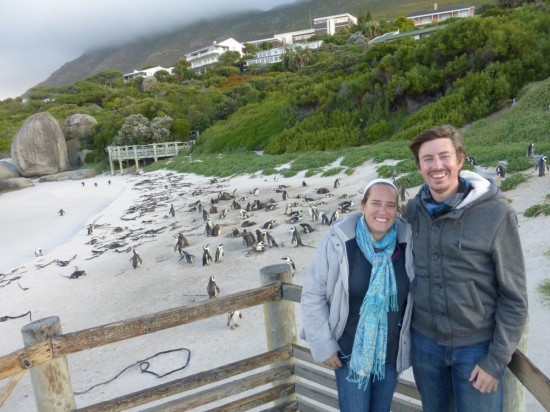 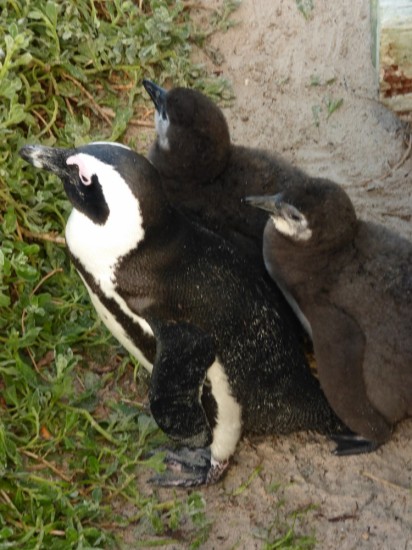 Mother penguin and her two babies. We were about five feet away from them. Alas, you’re not allowed to pet them. 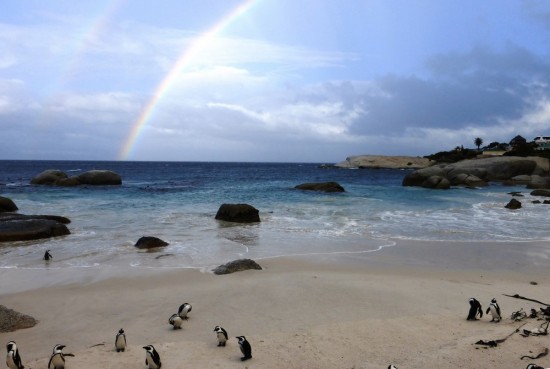 Penguins and a double rainbow. Does it get any better?!

Alas, we couldn’t spend all day watching the penguins, so we wandered back to our car, checked underneath it for penguins, and drove off in search of dinner. 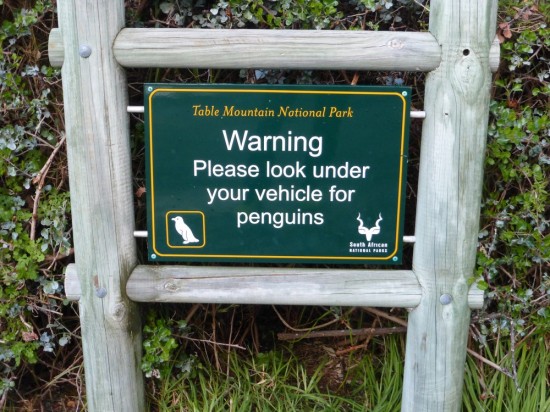 Yes, this is a real sign. Yes, we actually checked.

The gardens were established in 1913 with the aim of preserving South Africa’s unique floral diversity. Included in the garden are plants from five of the six biomes present in South Africa, as well as several wonderful man-made contributions from art and sculpture to architecture. We took a one hour tour by golf cart, led by one of the garden’s staffers and then wandered on our own for a while taking in the beauty of our surroundings. Below are some of the pictures we took along the way. 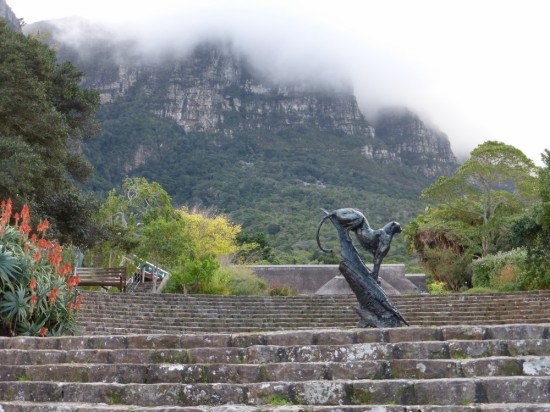 Bronze sculpture of a leopard in Kirstenbosch National Botanical Gardens, with Table Mountain in the background. 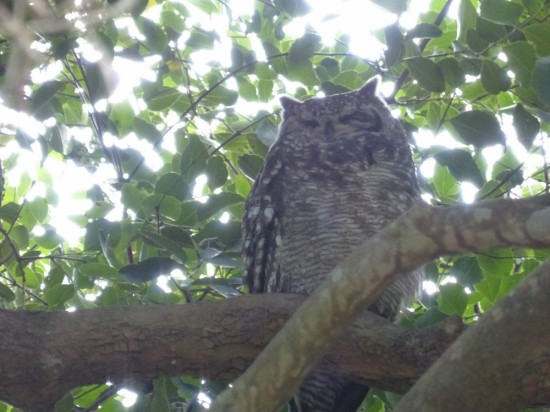 An Eagle-Owl that has taken up residence in Kirstenbosch. 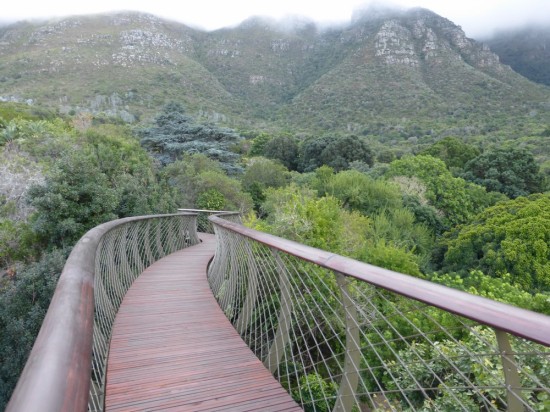 The “Boomslang Bridge” that snakes through the treetops off the side of a hill in the gardens, offering unbelievable views of the park and Table Mountain. 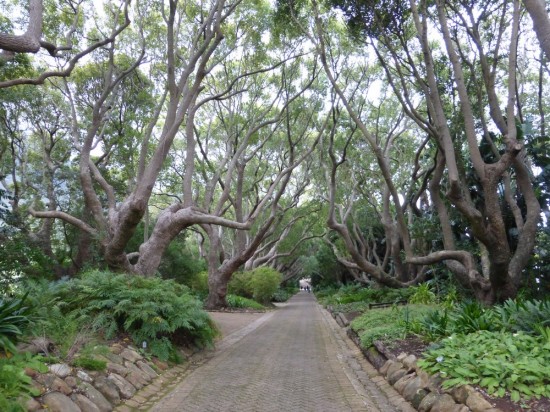 Tree lined driveway leading toward the main entry gates to the park. 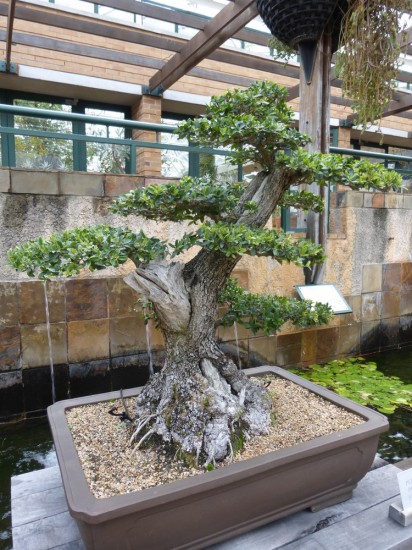 An 80 year-old bonzai tree, part of a collection inside the gardens.

After enjoying the area south of Cape Town from our home base in Hout Bay for three days, we packed up the car and headed east to Stellenbosch, the capital of South Africa’s wine country.

← Those Are Some Happy Feet
Stellenbosch: South Africa’s Wine Capital →