Chefchaouen (pronounced shef-sh-AOW-en) is a small town in the heart of the Rif Mountains in northern Morocco. The city is known throughout Morocco for three things: first, approximately 80% of the paintable surfaces inside the medina of the city are painted some shade of blue (about half of what remains is whitewashed). Second, the city is home to hundreds of (mostly friendly) cats that live in the streets. If you know me at all, you know that these two facts alone make Chefchaouen one of my favorite cities in the world. The third thing is, well, let’s just say there’s a certain green plaint in the Cannabis genus that is widely cultivated in the region. 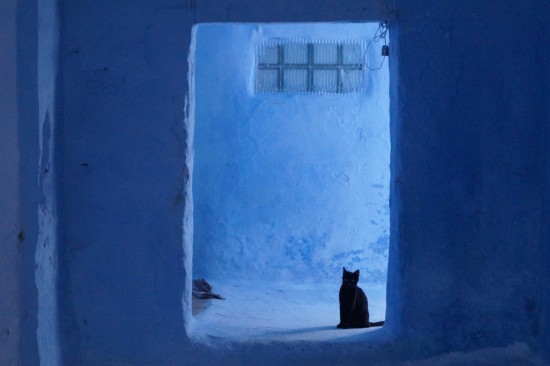 This cat lived in the house next to our hotel. The entire entryway to the house was painted blue, even the ceiling.

It’s more than just the blue paint and the cats that make me love Chefchaouen, but it’s a good start. The atmosphere in the city is pretty laid back compared to the rest of Morocco (possibly because almost all of the tourists are high). After spending a couple weeks exploring the bigger cities of Casablanca, Marrakesh, and Fez, we were happy to get to Chefchaouen with a population of about 35,000 and experience seven days of relaxation in smaller-town Morocco. We had very little (read: nothing) on the agenda for our stay here, and planned to just take it one day at a time.

We got started off on the right foot by opting to stay at Riad Baraka, a fantastic guest house/hostel (they have both dorms and private rooms available) run by a family from the UK – two brothers and their mother. “Mum” was away on vacation while we were there, but the brothers, Joe and Trevor, were always around, much to the benefit of the guests. Apart from being great resources about Chefchaouen and Morocco in general, Joe and Trevor were great for a conversation, a story, or a laugh. We spent quite a bit of time sitting in the common areas of the place just talking to one or both of them, hearing the story of how they came to own and run the place, comparing tastes in movies and books, or (mostly) milking them for as much information as we could since we didn’t know much about what there was to do in the city. 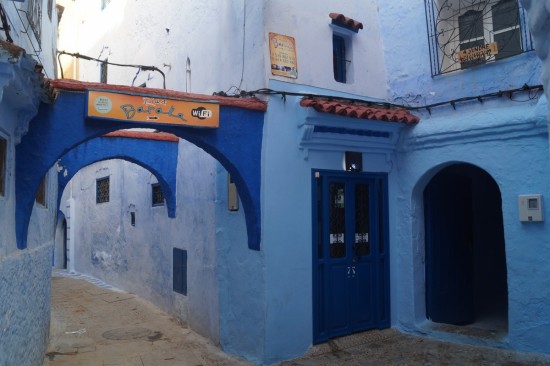 Through them, we were introduced to most of the other guests in the hotel – a firefighter from New York, a soon-to-be-attorney from Pennsylvania, an 18 year-old from California, two ladies from Belgium, and an Australian who after a 2 hour conversation had convinced us to add Namibia to our future travel plans. We also met David, the mid-70s Australian who spends his summers down the street from Riad Baraka, an awesome guy who designs and sells custom jewelry and a font of entertaining stories while on a long hike. Our stay at Riad Baraka was, I think, integral to our enjoyment of the city and we really can’t say enough about how much we loved it (and nobody even paid me to say this!)

We spent a lot of our time just lounging around the hotel, talking to other guests and catching up on blog-related things, but we did get out and enjoy the main attraction of the city: its environment. We went on a couple hikes, the first of which was a half-hearted attempt to summit Jebel al-Kalaa, the mountain that overlooks the city. Climbing it takes about five hours round trip, and with my hurt feet and Danielle’s hurt leg and our average fitness levels, we set out for our hike with the aim of just enjoying ourselves and getting as close as we felt like to the summit, which, it turned out, was about 1/3 of the way up. We stopped there and had a snack while sitting on the edge of an outcropping that overlooked the city below. It was a really peaceful spot and well worth the hike. I wish we could have kept going, but it was pretty hot and we just weren’t physically fit enough. Next time. 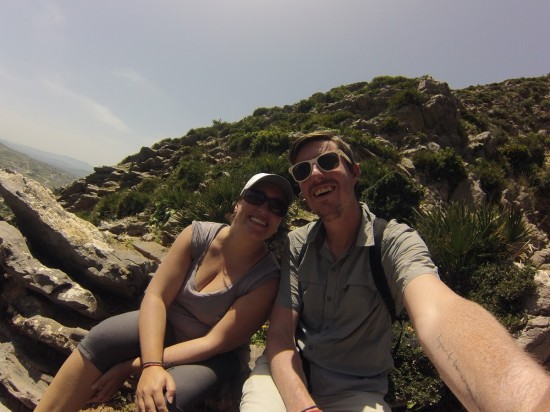 The highest point we reached on our hike. 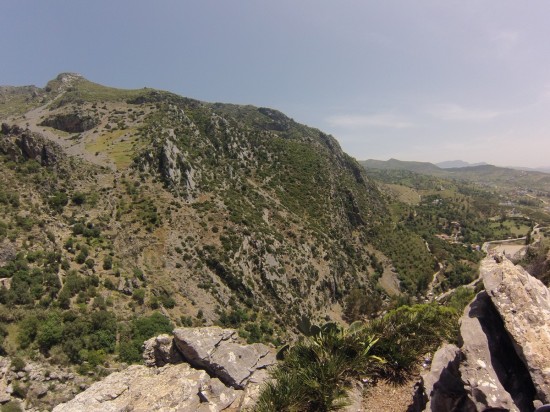 The view from our perch.

A couple days after our aborted summit attempt, we joined up with four others from our hotel and got a “grand taxi” to take us out to a nearby national park (about an hour drive) for more, hopefully less-steep, hiking. A note about the “grand taxis”, there is nothing “grand” about them – it just means they are for long distances. The taxi was a 1980s model Mercedes sedan. The driver sat in his seat, four people piled into the back seat, and Danielle and I shared the front passenger seat. It wasn’t comfortable, but it’s just how things are done in Morocco.

The hike ended up being more strenuous than we expected. We were dropped off at the end of the road and told that the waterfall we were aiming for was about an hour and a half down the trail. It took Danielle and me about 3 hours to get there and this time it wasn’t because of us being in bad shape – it was simply a LONG walk. The worst part was that when we got to the waterfalls, we were a little disappointed. It wasn’t rainy season and we weren’t expecting Niagra or anything, but the waterfall was a bit wimpy, there weren’t comfortable places to sit and enjoy the view, and the water was just to the liquid side of ice cold. 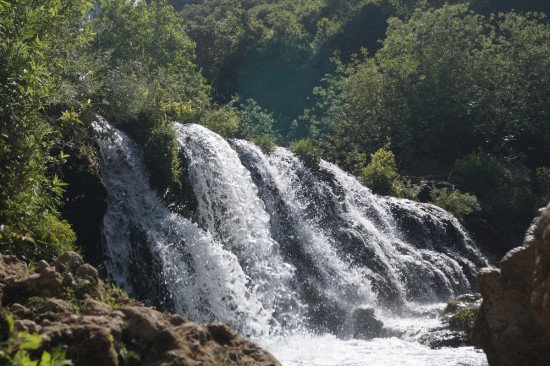 Small waterfall on the way to the the larger waterfalls. These falls were actually more impressive. 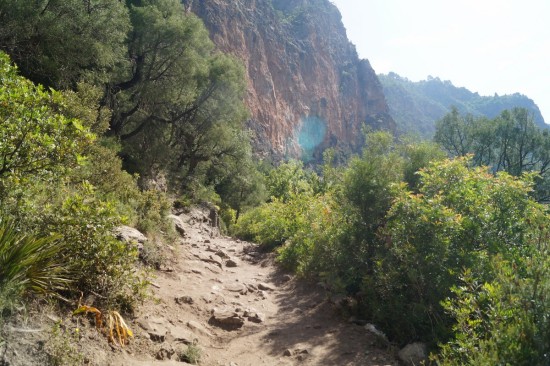 The trail on the way to the waterfall. 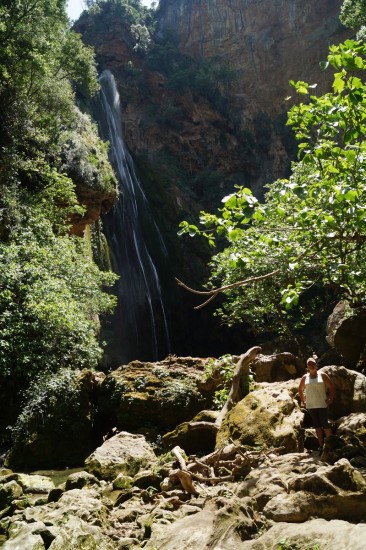 The waterfall! Danielle is standing in the lower right corner if you need some scale.

We hung out at the falls for about an hour before we had to turn back – our cab driver had given us seven hours total in the park so with a nearly three hour hike back, we couldn’t really dawdle. On the way back, there were a couple places where the down slope was so steep and the dirt/pebbles underfoot were so loose that footing became a real issue. A couple people in our little party bit the dust on the way down, and Danielle (after uttering several sentences along the lines of “are you FUCKING kidding me?”), just sat down and scooted down the slopes on her butt. Her clothes and possibly her dignity soiled, she proudly held her head high and proclaimed “What? At least I didn’t fall down.”

Unfortunately, she forgot to knock on wood after saying that, because about a half hour later she slipped while stepping up onto a rock outcropping and fell down hard on her hand and shoulder. Every other person with us offered their first aid supplies to her which caused us to realize that we’re not cut out for this “outdoorsy” stuff – we didn’t even bring our first aid kit! Minor scrapes disinfected and bandaged, we soldiered on and completed our hike about six and a half hours after we first started. All six of us were looking forward to a hot shower and some food, but instead we all piled into our “grand taxi” for the luxurious hour long ride back to the hotel.

On the way back, we learned that it was Dan’s birthday (the fireman from New York). The six of us decided to order pizza and have a party on the roof terrace  of the hotel in celebration, which was a ton of fun. Riad Baraka has beer and wine for sale (incredibly rare in Morocco, believe you me) which made things all the more enjoyable, and we stayed up for hours swapping stories and learning about eachother’s hometowns.

Other than our hiking adventures, we spent plenty of time exploring the city itself. Nothing remarkable happened, but unlike the bigger cities in Morocco, we didn’t find aggressive touts or shopkeepers in Chefchaouen: it’s a chill, gorgeous town that’s perfect for wandering, so wander we did! They say a picture is worth 1,000 words, so in lieu of a few thousand more, here are some of my favorite shots from our week in The Blue City. 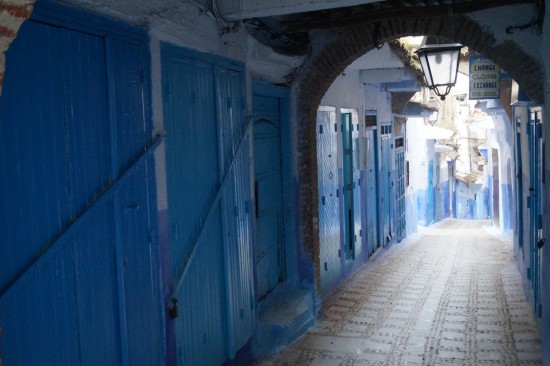 In the morning, the streets are deserted and the shops are closed up, revealing their blue doors. 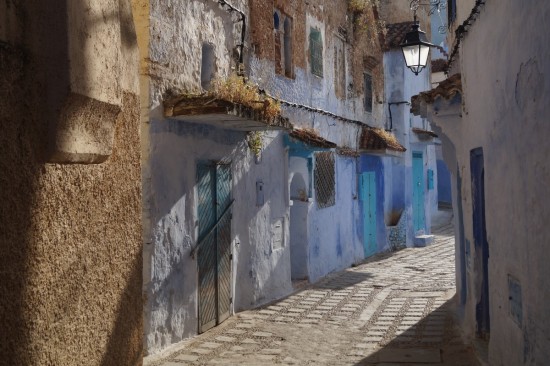 The streets of Chefchaouen just after sunrise. 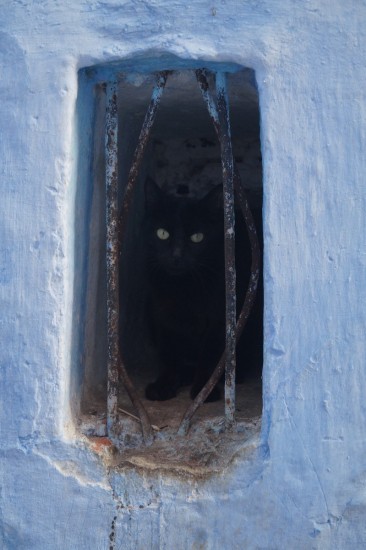 Look closely – there’s a cat inside this blue window. 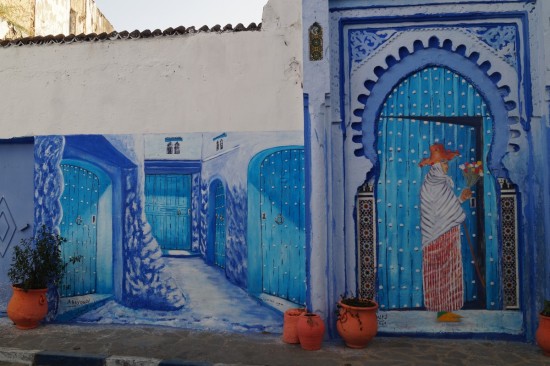 A wall mural in the medina. 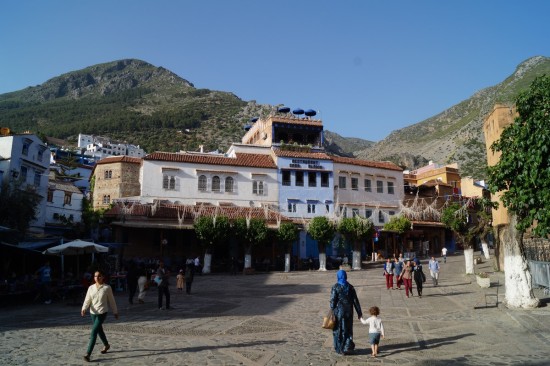 The main square in the city and interestingly the only place in town that’s not mostly blue. 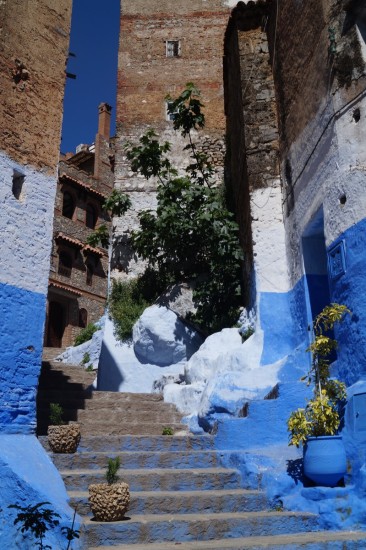 Blue-washed steps heading toward the back of the medina. 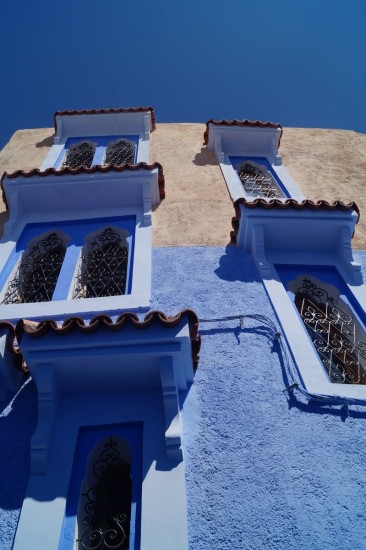 Blue walls and windows in Chefchaouen.