“This Is Not Afghanistan”

This post sponsored by Alan and Maureen. Thanks for everything, guys!

After spending 4 days on our own in Casablanca, we headed to Marrakesh to meet up with Danielle’s dad, Alan, and his girlfriend Maureen. They had spent a few days in Barcelona and were swinging down to Morocco to spend a week with us in the Imperial Cities of Marrakesh and Fes. Getting to Marrakesh from Casablanca was a breeze – the train system connects major cities in Morocco for a reasonable price, and the second class coaches have no capacity controls so you don’t have to buy your ticket in advance. A few hours and $22 later, we were in Marrakesh.

Tourists flock to Marrakesh to get a sense of the “traditional” Morocco. The old city center, or medina, in Marrakesh is among the oldest and largest of its kind and is built around the central public square known as Djemaa El-Fna. This square is a Jekyll and Hyde type of place. By day it’s full of snake charmers, ladies inking henna, and vendors serving fresh-squeezed orange juice; at night, it turns into a huge pop-up open-air food court with dozens of stalls selling freshly-grilled meat, snail soup, sheep’s head, and an endless variety of cookies and treats. 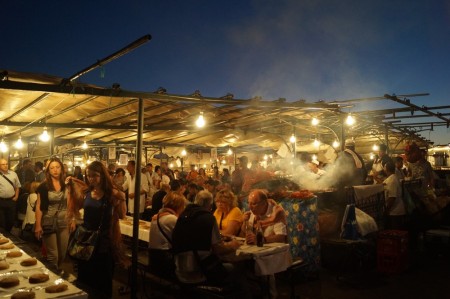 The Central Square at night, full of food stalls. 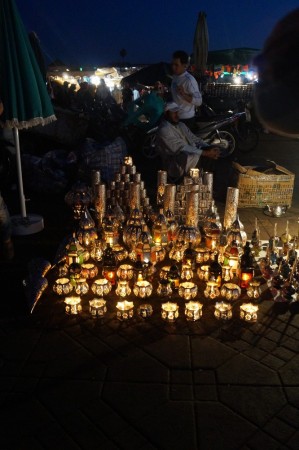 Lantern/Candlestick vendor in the Marrakesh medina, at night. 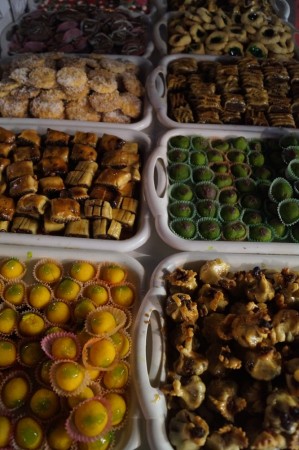 This transformation happens every day, and is kind of unbelievable – even the feel of the place is completely different. During the day it’s more aggressive with women physically grabbing people and applying henna and demanding payment afterward (both Danielle and Maureen became victims), snake charmers blaring their music, and shop owners following you around with quick one-liners trying to get you into their store. At night it’s more festive, with hundreds of Moroccan tourists gathered in circles around storytellers, others watching magicians or dancers, and everyone breathing in the fragrant steam and smoke rising from the 60-odd food stalls in the center of the square. We loved the place at night and visited on each of our four nights in Marrakesh. Danielle even played her “time to be an adventurous eater” card a couple times, so we all got a taste of grilled sheep’s head one night, and snail soup the next. I’m glad I tried both, but wouldn’t hurry back for seconds.

Aside from Djemaa El-Fna and a quick visit to the old Jewish quarter, the medina of Marrakesh is more-or-less about shopping. Every inch of real estate on the main streets is occupied by a shop selling shoes, ceramics, rugs, leather goods, or soccer jerseys. What surprised us most about the shops were the similarities to India. While the medina itself was different from India’s city centers, the clothes that were being sold were literally identical to those in India. It made us wonder: is there a factory somewhere that this stuff is churned out? Or does someone just produce patterns and people from both India and Morocco buy them and make identical pants? Also, like India, each shop sold the same stuff. You’d be at one shop looking at pottery and then walk to the next shop and it was the same. Not similar, not variations on a theme, but identical. 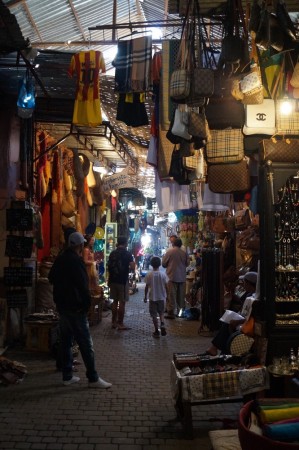 The Marrakesh medina: thousands of narrow streets lined with shops.

We did our fair share of shopping here because Alan and Maureen (in addition to generously funding our room and board in Marrakesh and Fes) had graciously offered to take anything we bought back with them so we didn’t have to pay to ship it home. I like what we bought, but I really enjoyed the process of buying it, just getting lost in the huge medina and wandering. When I say “getting lost”, I mean that both figuratively and literally: inside the medina, all the walls are painted this reddish-pink color (reminiscent of Jaipur, India) giving rise to the nickname “The Red City” or “Super-Easy-To-Get-Lost-in City” since everything looks the same.

Not content to spend all of our four days wandering the medina, we set out for a day trip to the foothills of the High Atlas mountains and the small town of Asni to visit their Saturday market. The scenery on the drive to Asni was nothing short of breathtaking as we wound our way through mountains and small towns, getting ever closer to the snow-capped peaks of the High Atlas just a few miles away. Asni itself, however, wasn’t my favorite place. The market here was, for me, nothing special and the vendors were incredibly aggressive. Since Asni is a little hard to get to (a couple hours by car, and not cheap), there aren’t many tourists at the market so the few that are there get a lot of attention and we were no exception. I’m used to having vendors follow me, refuse to go away when I decline their wares, continually ask for “my price”, try to put things in my hands, and generally annoy me. After all, I spent 3 months in India. But these guys take the cake. 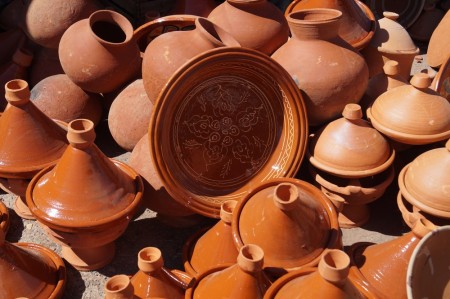 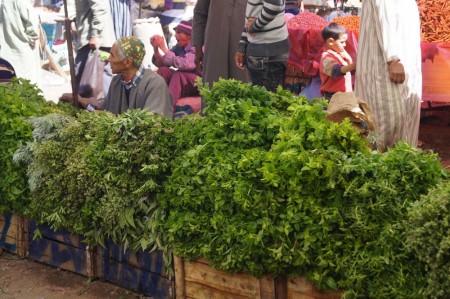 Herbs (mostly mint, it was so fragrant) for sale at Asni’s weekly market.

From the moment we set foot in the market until the moment we left about 30 minutes later, two guys followed us, “The Guy in Blue” and “The Guy in White”. Both were selling metal bracelets. The Guy in White attached himself to Danielle, and The Guy in Blue attached himself to me. Things started off cordially as I said “no thanks” in 4 languages, smiled, and tried to make the guy understand he was wasting his time. I could hear Danielle behind me with the same routine going on, but she was doing a bit more laughing and keeping it lighthearted. We walked around for about 20 minutes just browsing while trying to ignore the constant chatter of The Guys in Blue and White (“Very reasonable, good price. Five for ten Euro. For your wife. For your girlfriend. Look – good quality…”) Things with The Guy in Blue turned sour quickly though when Danielle, Alan, Maureen, and I were a bit spread out and the following little conversation took place:

Alan: “where’s Danielle?”
Me: “Oh, she’s back there getting hassled by the bracelet guy.”

I said it with a smile and with a tone that any native English speaker would understand was good-naturedly sarcastic but The Guy in Blue is not a native English speaker and he took it badly! He became angry and scolded me, “No! That is not right! This is not hassle! This is a market, people come to buy and sell, he is selling you are buying. You are a guest. You are a tourist. You come to buy. This is not Afghanistan. That is not right. Don’t say hassle.” Oops.

No amount of smiling, apologizing, or explaining my intent would do – he was irreparably mad at me. I felt bad – I hadn’t meant to insult The Guys in Blue and White, and I told him so. I even got friendly, shook his hand and said “my friend” a lot. He seemed to get over it and I secretly hoped he would be so pissed at me that he’d go bother someone else, but he just moved on with the hard sell: “Good bracelets, good quality, good price, 5 for 10 Euro, you say your price…” Damn. 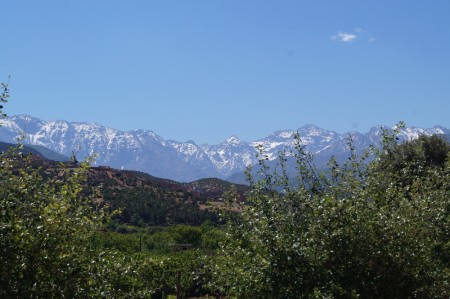 View of the High Atlas mountains as seen from Asni.

We eventually made our way out of the market having bought plenty of things (but nothing from The Guy in Blue or The Guy in White), and with the vendors out of earshot, the mocking of me for my cultural insensitivity could now commence. As we joked about my faux pas, our driver took us about 20 minutes closer to the mountains to a smaller village in search of lunch. We were deposited at a nice restaurant with a terrace offering magnificent views of the mountains and we all enjoyed mint tea and Moroccan Tajines. I escaped the restaurant without offending anyone, and with the High Atlas at our backs, we headed back to Marrakesh.