Tomorrow, we’ll be leaving India. As our departure date has crept up, I’ve found myself thinking about what I miss from the US that I can’t wait to get back to during our 3 week pit-stop there. It’s exciting to think about eating sushi and Texas BBQ, walking on sidewalks, and sleeping in a bed with correctly-sized sheets; but thinking about what I miss from the US always turns back around on me as I start to think about what I’ll miss from India. Below is a quick list of 10 things I’ll miss, in no particular order. 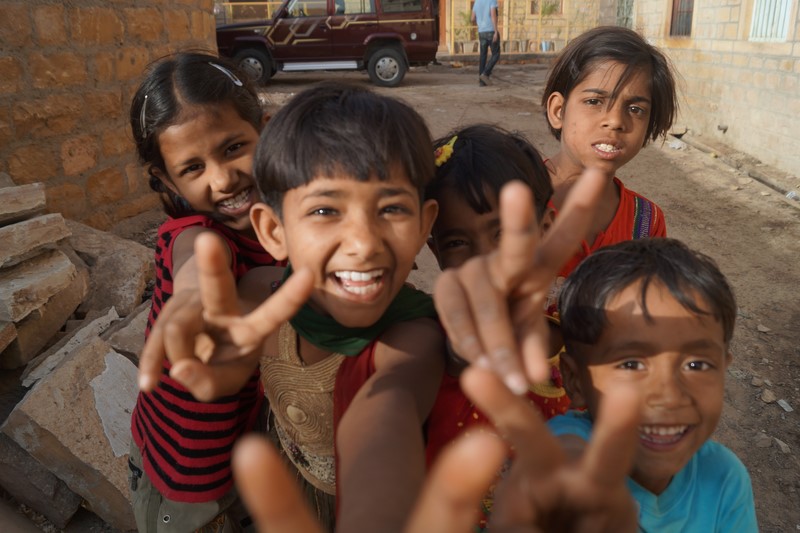 Kids in Jaisalmer giving “peace” signs (without instruction) as Danielle takes their picture.

It’s hard not to like the kids in India, even when they’re asking you for money, candy, or pens (yes, pens). The kids here are energetic and fun, and they love to follow you around and practice their English. Favorite moments with the kids here include: 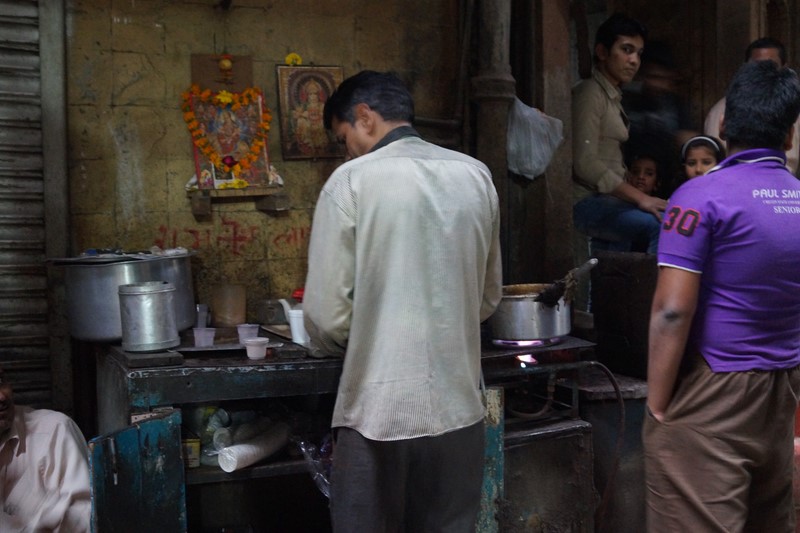 This guy, in an alley in Old Delhi, made some of the best chai we had in India. The pot on the far right contains the tea as it simmers.

In the US, “chai” is something you get at Starbucks that costs $5. Here, “chai” is the Hindi word for tea, and damn, it’s good. Typically served with milk and sugar, a cup of chai here will usually run you 10 rupees ($0.15). “Masala Chai” is tea simmered with spices, including cloves, cinnamon, and cardamom, then served mixed with milk and sugar (the inspiration behind the Starbucks drink). This stuff is seriously awesome and is a little different everywhere you go. When you’re in India, do yourself a favor and never pass up an opportunity to try some masala chai, especially if you’re invited into someone’s home. Most people we encountered, even waiters at restaurants, were surprised and thrilled that we wanted our tea “Indian Style”, as they say in English.

3. The Fact that Everything is Holy 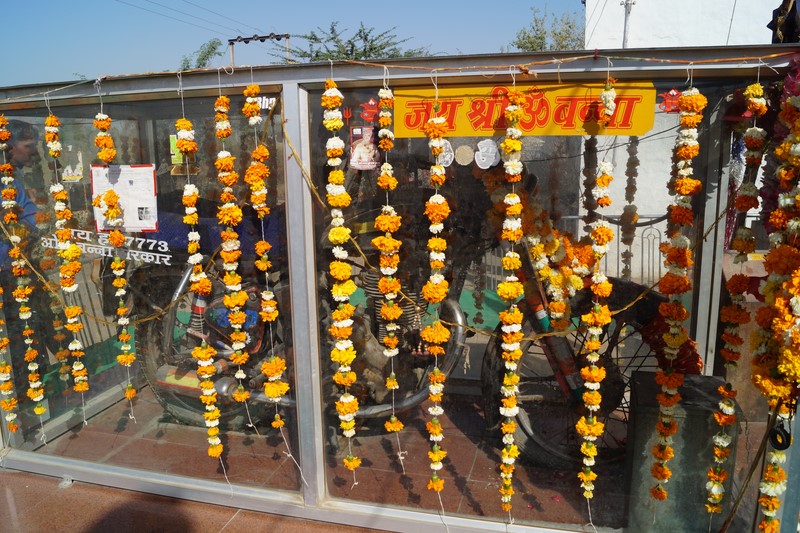 Hard to make out, but this is a holy motorcycle at Bullet Baba Temple. Read about it, it’s awesome.

After a month and a half in India, I realized that literally every river we’d seen was described to us as a “holy river”. Since then, we’ve seen holy cities, holy trees, holy cows, holy people, holy shrines, holy temples, more holy rivers, and even a holy motorcycle. The number of places we’ve been that are described as “one of the most sacred in Hinduism” is beyond countable at this point. Please note I’m being serious here about my admiration of this fact: I like what it says about Hinduism that the sacred can be found anywhere, as long as you look at something the right way. 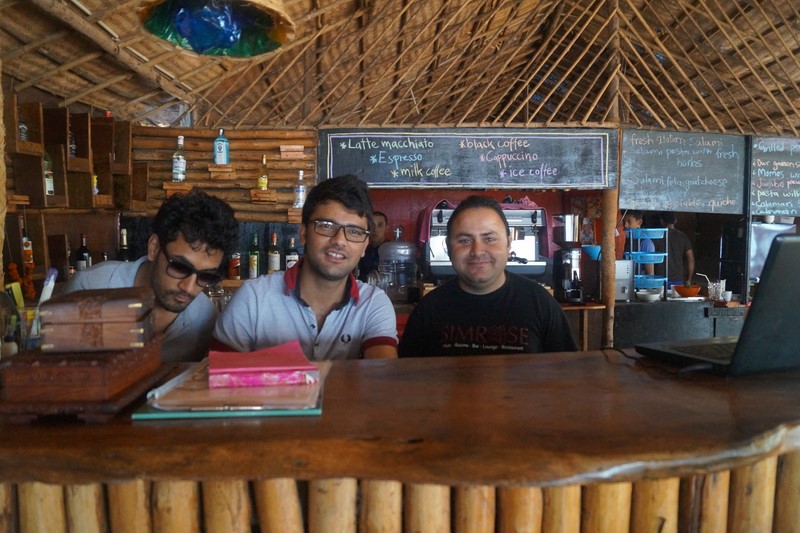 The staff at Simrose. After spending 3 weeks with them, we came to appreciate the unique and creative uses of the English language that they sometimes employ. No disrespect meant: they all speak at least 3 languages and are awesome guys.

I am equal parts mystified and amused by the use of English in India. The particular brand of English spoken here is best described as British English spoken with rules influenced by the grammar of the local language, with slang provided by American English, all combined together with a uniquely Indian, pragmatic, twist. Some of my favorite quirks: 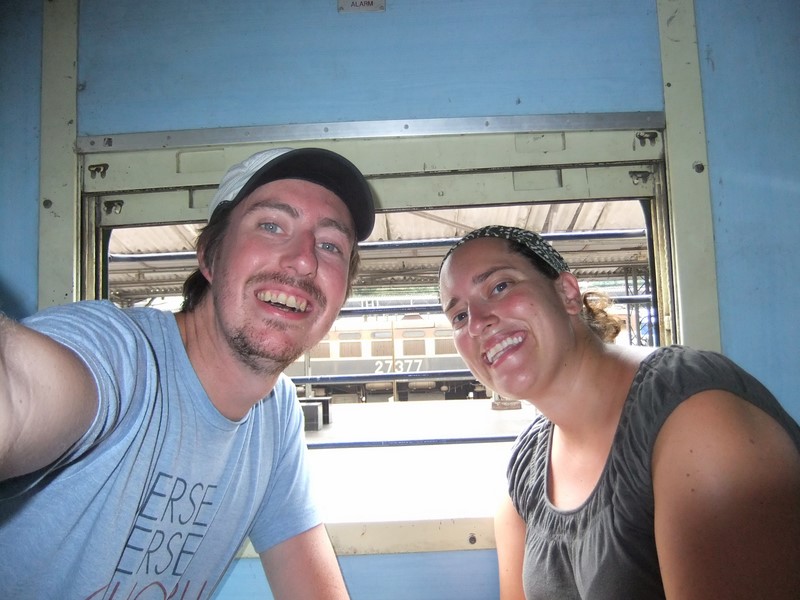 In unreserved general class on the “Memu”, at the start of our 4 hour ride from Kochi to Monroethrutru.

We loved the trains in India. During our time here, we’ve ridden in all of the air-conditioned classes (AC first class, AC Chair Car, AC 2 Tier, AC 3 Tier) as well as unreserved general class (on a local train) and a couple different metro systems. The trains are clean, comfortable, and run more-or-less on time which is quite a feat for, say, a 17 hour train with 23 stops. Further, Danielle claims that the best toilet you’ll find in India outside of a decent hotel is the western style toilet on the overnight trains.  Besides the train itself, the experience is great: you meet interesting people, the food is cheap and good (and safe to eat), and the scenery is at times breathtaking. Last but not least, the price is right: one of the longest trains we took (400 miles) cost us a whopping $13.50 each in AC 3 Tier. Can you imagine getting from DC to Boston for $13.50?! 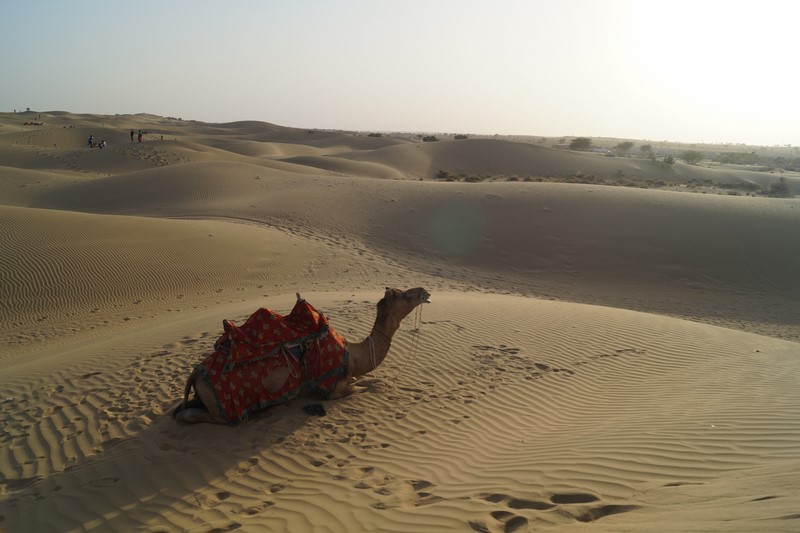 This is in western India outside Jaisalmer. A few hundred miles to the east are tree-clad mountains, to the south are gorgeous beaches, and to the northeast are the Himalayas.

In this respect, traveling in India is somewhat like traveling in the US or, I suspect, any sufficiently large country. Crossing state borders in India often means the locals will use a different language, have a different cuisine, emphasize the worship of different gods, and dress differently.  Sometimes, the difference can be stark. For example, Kerala and Karnatakta border each other but seem very, very different in ways that, for example, Indiana and Ohio do not. 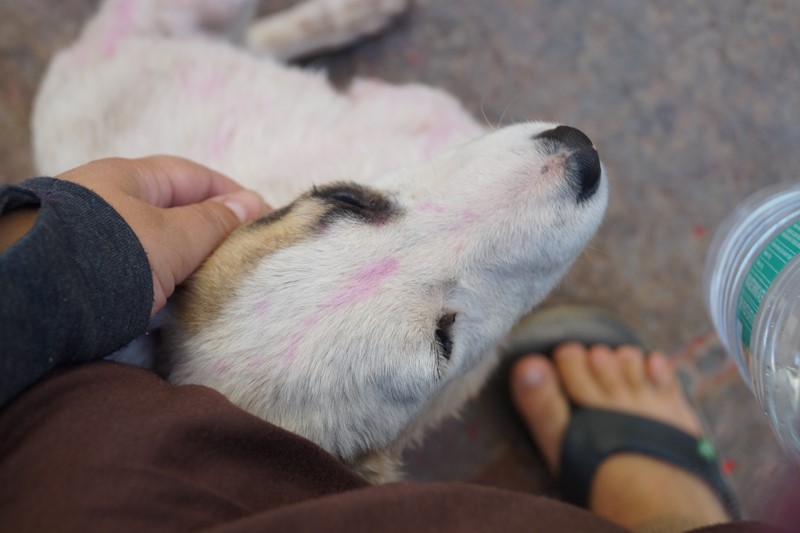 The stray dogs are, to paraphrase a friend “like many things in India, both awesome and terrible (depressing).” This little guy’s fur is partially pink due to colors from Holi.

Before coming to India, you’re told by others who have been that “There are cows everywhere.” And we’ve learned that that is completely true. What we didn’t learn until we got here was how varied and awesome the other animals are. We’ve seen tigers, elephants, camels, peacocks, a variety of birds (there are over 1,300 species), a variety of monkeys, dolphins, bears, and several kinds of fish. In addition, we’ve seen a ton of cute dogs and puppies, cows, chickens, water buffaloes, ducks, goats, horses, and other agricultural-related animals. Unexpectedly, the brightly-colored birds have been a real highlight for me. 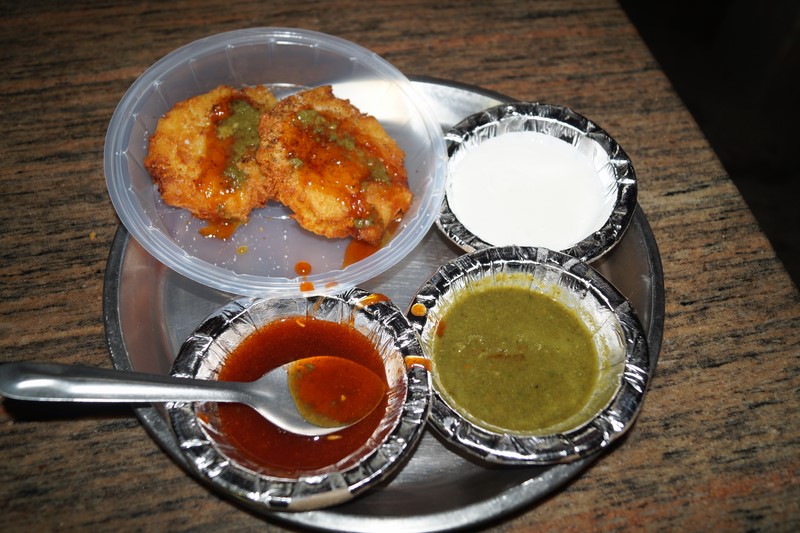 My favorite snack, aloo tiki. It’s a mashed potato cake deep fried and covered in sauce. This shot is at a market in Delhi, but it’s even better when served on white bread from a street vendor.

I could write for days about the food. I’ve found one of my new all-time favorite dishes, dal makhani, which is black lentils stewed with kidney beans, garlic, cream, spices, and a tomato-based sauce. It is then eaten mixed with rice and/or with chapatti. I could eat that pretty much every day. Beyond that, we’ve had dal (lentils) more ways than we can count and every dish has been good. The okra (aka bhindi, aka ladyfingers) here is amazing and we were invited into someone’s home where we were served stir-fried okra with green peas that was just out-of-this-world good. The food we had at the ashram in Rishikesh was fantastic, even though it was only subtly spiced. In the south, we feasted on fish curry (in Goa) and grilled fish (Kochi) that still has my mouth watering. And then there’s the snack food: aloo tiki, samosas, pani puri, papadam, Mysore pak… all so good! There’s a stereotype in the US that all Indian food is spicy, but it’s completely wrong. There’s a spectrum: it’s spicier in the north than the south, but all-in-all the food hasn’t been spicy for the most part, just spiced (i.e. flavorful).

9. What You See While Driving 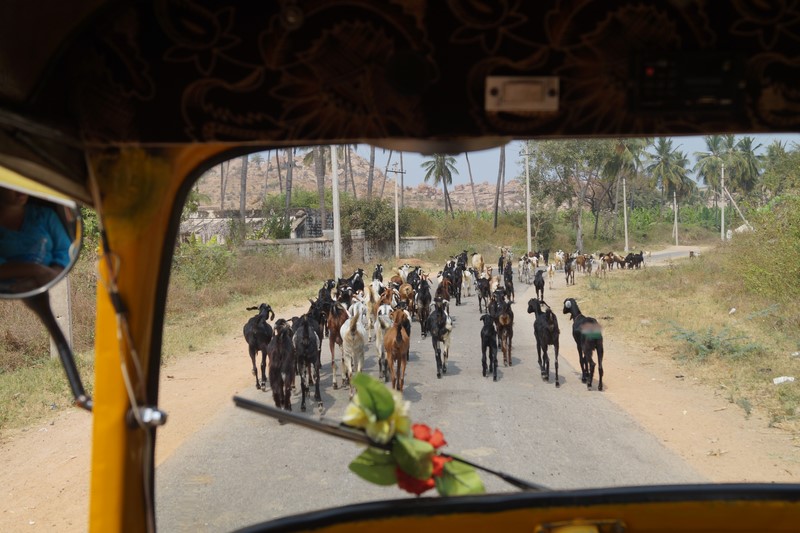 Goats being herded down the road outside Hospet, in south-central India.

I posted a tongue-in-cheek look at the “rules of the road” here in India a few weeks ago, but all kidding aside, the death-defying driving and the shit you see when driving around in India fascinates me. After several weeks you learn to tune out the part of your brain that freaks out every time you’re nearly involved in a car accident (read: every 30 seconds) and you can begin to appreciate your surroundings. The delicate dance of cars, people, bikes, scooters, rickshaws, cows, dogs, and goats is really a sight to behold, and seeing the (sometimes ridiculous) English advertisements as you drive is a real treat. 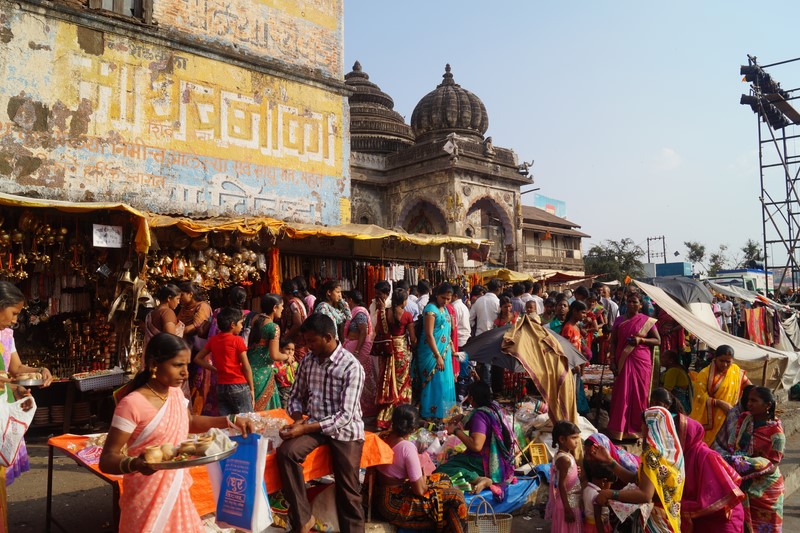 The edge of the market on a busy afternoon in downtown Nasik.

Here in the land of extremes, the land of opposites, the colors are no different. Many (most?) buildings are drably colored on the outside – earth tones often blackened by the combined effects of pollution and mold. This drabness provides a background for the most colorful culture I’ve ever seen: women in brightly colored saris interwoven with gold thread and studded with jewels; trucks painted with bright yellow, green, orange, and white flowers, stripes, and designs; flowers everywhere – on people, on the ground, draped on pictures of departed loved ones, draped on cows, draped on temples. Everywhere you turn in India you’re guaranteed to see an amazing display of colors, courtesy of either India’s citizens or India’s wildlife.

More than perhaps any of these, though, I will miss some of the intangibles – the moments when you feel lost or confused and India sends someone to help you, someone who is often (almost annoyingly) persistent at making sure you are helped regardless of what they’ve got going on themselves. I’ll miss those moments, and I’ll miss every person we met along the way – the random men with stern looks on their faces that turn to wide smiles when you give them a quick smile, our fellow travelers who shared their stories and offered an opportunity to humorously reflect on our experiences, and the Indians we’ve met who are stunningly honest about the problems facing India and its people and their hopes and dreams for the country they love. Goodbye, India. Or rather, to quote Judy Maxwell: let’s not say “goodbye”, let’s just say “au revoir.”