A Little Bit of Delhi Magic

Delhi was the last stop on our three month tour of India. Throughout our trip we had heard all kinds of reviews of the city since it seemed to be where most people began. At best we heard it wasn’t worth more than a day trip and at worst it was described as the worst city in India. In the end we decided to only leave a couple days to explore the city, taking the reviews into consideration but not willing to write it off completely. As we’ve learned during our first few months on the road it’s always best to take other people’s opinions with a grain of salt. So much of someone’s experience is colored by their preconceived notions and expectations and not necessarily by the reality of the situation. We have found that in most circumstances you can typically disregard the most extreme endorsements or condemnations. For example, we found Varanasi to be neither the “most moving” or “nastiest” city in India, nor did we agree with the seemingly universal evaluation of Casablanca as a dud. 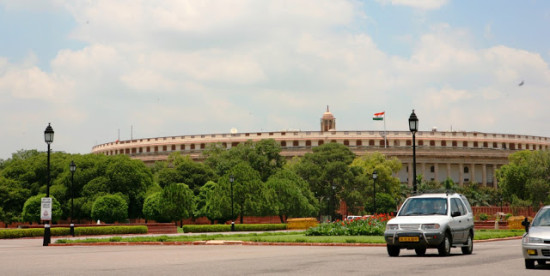 Prior to arriving in Delhi we had gotten connected with Delhi Magic who had invited us to be their guests on one of their newest tours, Delhi by Metro. Described as “an offbeat look at New Delhi and Old Delhi” we were excited to have a guide around the city that we knew little about. This tour, which is normally led by students from Manzil (a youth empowerment and learning NGO), explores the city via metro and rickshaw, as well as good old fashioned walking. We would definitely recommend it as a great way to get introduced to Delhi especially for those using it as their entry point into India. 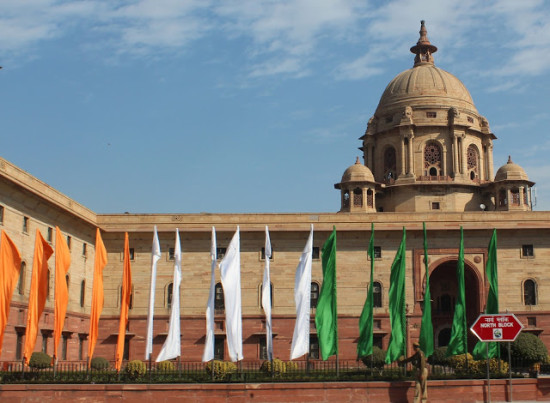 For our tour we were met by Deepak at Connaught Place and led on a winding journey. We really appreciated having such a knowledgeable and friendly guide who could help us understand both the city’s past and its present.

Sometimes I think tourists are too interested in the storybook/historical side of a country or city and without hesitation write off the more modern aspects as inauthentic or shallow. But what is the point of restricting your experience and learning to the place it was 1,000 years ago? You would never meet a person and say “I only want to learn about your grandparents and parents, I have no interest in understanding who you are” so why are we so quick to say that to the countries we visit?

Anyway, rant aside, we loved driving along the wide boulevards and taking in sights such as the India Gate, President’s House and Parliament. We were especially surprised to see how much the avenue between the gate and the Parliament reminded us of the National Mall in Washington, DC. 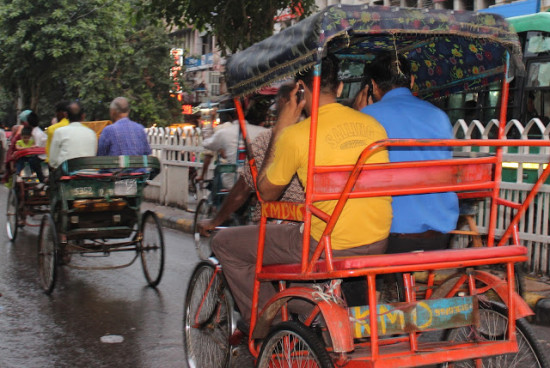 After we had completed our tour of New Delhi we hopped onto the Metro and headed across town to the bustling bazaars of the Old City. We passed through the various markets, each identified by the wares available (silver, wedding, cloth, etc). Even though by this point in our journey we were pretty familiar with these types of bazaars, we loved having the opportunity to ask Deepak questions about daily life throughout Delhi. Bombarded with a continuous stream of “why do you do…” and “what is the meaning of…” he never tired of serving as our India expert (or at least he never showed it). It was awesome to be able to blaze through the mental list of questions we had been carrying with us for the last few months. Shortly after the walking tour began the overcast skies that had been following us all afternoon finally opened up. Luckily we were able to duck into a side street and follow Deepak through a series of back alleys. These small passageways passed under houses and he informed us that this was how locals made their way through the city. It was fascinating to discover, since from the main road you would never even know they existed. It was almost as if all of the houses were built with false bottoms. We finally arrived at an intersection of sorts and, since he knew we were lovers of chai, we stopped for a while and enjoyed the shelter of the plastic tarps stretched above us. Away from the noise of the main road all we could hear was the pitter-patter of the rain and the sizzling of the oil from the snack vendor in the corner. 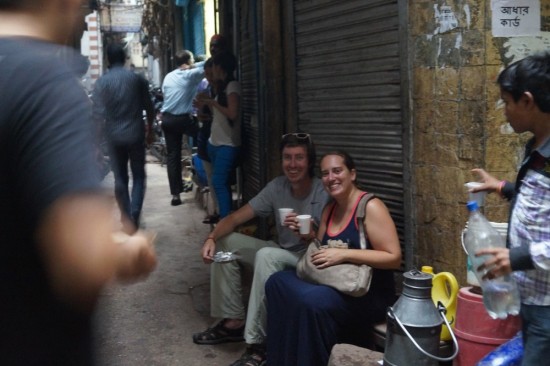 Sipping chai and waiting for the rain to stop.

As we sat enjoying our chai we kept picking up whiffs of the food cooking across the way. We asked Deepak about it and he said it was Aloo Tikki, basically a potato pancake on white bread drizzled with a duo of sauces (one sweet, one spicy). Feeling adventurous, and a bit hungry, we decided to give it a try and boy were we glad we did. This tasty treat was the perfect snack to enjoy on a rainy afternoon perched on a stoop. Adam kicked himself for not finding out about it earlier in our trip and ordered it every chance he had over the next few days. 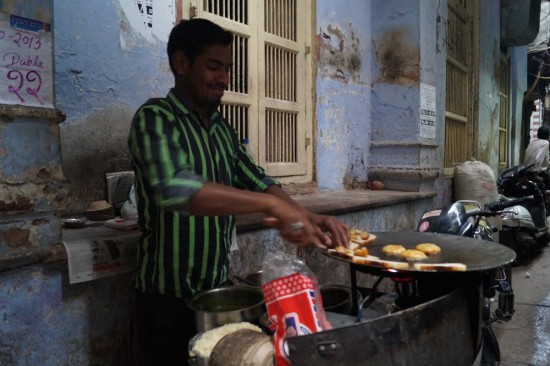 While the chai and snacks were great, what really made this moment memorial was our conversation. The three of us had clicked immediately and by this time we all felt comfortable sharing personal stories. We told Deepak all about our trip and the life back in the States that we left behind. He opened up about his plans and dreams and the things he was working towards. We were shocked to learn he was only in his early 20’s, since he seemed so mature, and entertained (at least I was) to learn that he thought Adam was in his late 40’s/early 50’s. It was so nice to feel like we were chatting with an old friend. Sometimes you don’t realize that months of conversations restricted to pleasantries takes a toll on you and are refreshed by talks like these where you feel like you have made a real connection with another human being. While the whole day was wonderful, our conversation with Deepak will definitely remain in our memories as one of the highlights of our trip. 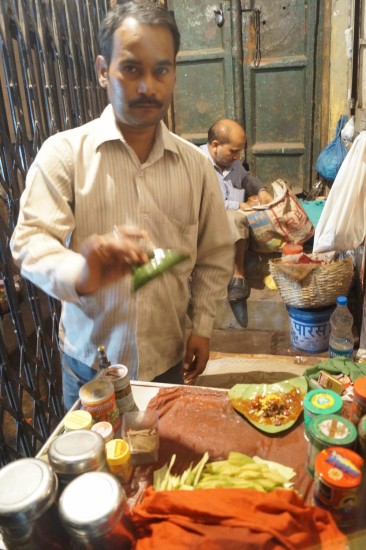 As the rain began to let up it was time to continue our exploration of the city. Back on the main road we came upon a paan stall and decided to take advantage of our English speaking guide to learn more about it. We learned that the sweet combination is made of betel leaf, areca nut, cured tobacco and ‘other spices’. When we inquired further about what ‘other spices’ meant we were simply told it meant flavoring, so I guess we’ll never really be sure. Too self-conscious to try it on the street we had them wrapped up in another betel leaf to-go. (Don’t miss our video at the end of this post of our ridiculous attempt at chewing paan for the first time). 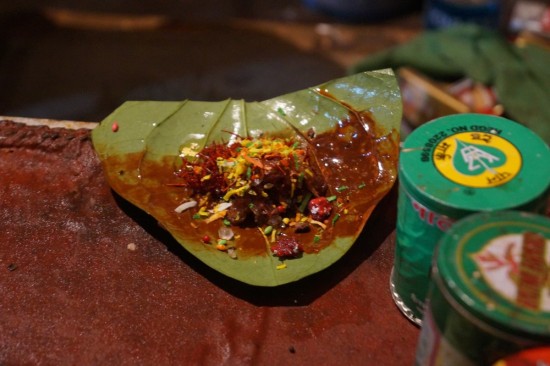 After our paan purchase, and of course another glass of chai, we decided it was time to stop for more chat (snacks). We were once again able to take full advantage of having Deepak at our disposal to ask about all of the foods that had intrigued us but we hadn’t been brave enough to try on our own. We had mostly been concerned about what dishes had garlic and onion, so it was nice to know we didn’t have to worry about things getting lost in translation. For this snack break we headed into a busy shop called Haldiram’s that had a great menu to choose from. 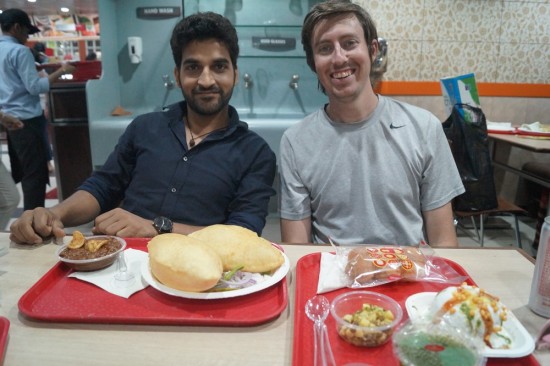 Deepak and Adam about to chow down.

Adam finally got to try pani puri (bread puffs filled with spicy water) and I got to try a dish that was a puffed bread filled with potatoes and topped with yogurt and spices. I of course can’t remember its name, so if you know it feel free to let us know in the comments J.  Deepak also ordered a dish that was chana masala (spicy chickpeas) with puffed fried bread. Adam was able to have a taste, but unfortunately I had to pass since it had onions. 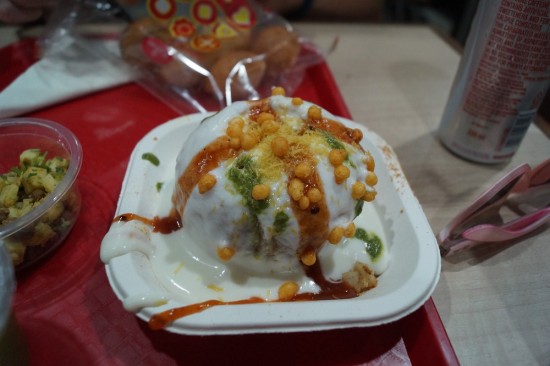 Can’t remember the name of this snack but I do remember it was delicious!

Around 8pm it was finally time to part ways. We said our goodbyes to Deepak, exchanged contact information and made our way back to our hotel (The Metropolis Tourist Home, check out our review). In the end we were so glad we had taken the tour and SO grateful that we still had a couple days left to explore the rest of the city. Once again we found the ‘haters’ to be mistaken. If you take the time to get to know the city and refrain from prejudgments, we know you’ll find a little bit of Delhi magic.