Before heading to Varanasi, the holiest Hindu city in all of India, we had heard mixed reviews. The only consistent theme was that everyone’s opinion was extremely polarized: some said it was awe-inspiring, peaceful, and deeply moving, while others said it was dirty, crazy, and crowded – it was very much a “love it or hate it” kind of city. As a result, we headed into the city for three days and two nights, expecting the worst, but hoping for the best. Our experience, however, was somewhere in the middle.

To be honest, I don’t really have much interesting to say about Varanasi. As Danielle put it, “we finally made it to the holiest city in the country, and we were wholly unimpressed.” That’s not to take away from those who found it amazing, I can see that: the sunrises are beautiful and the religious fervor in the city is palpable. I also can’t really argue with those that hated Varanasi – it is kind of dirty (though not much more so than other Indian cities, the streets are just narrower), the traffic is horrible, and I imagine it is oppressively hot in the summers. All that said, I felt that I was too much of an “outsider” to really appreciate the religious significance of the place, and had seen enough of India that I wasn’t at all surprised or discouraged by the crowds and dirty streets. There were, however, some definite highlights and great “oh, India” moments along the way though, so without further ado…

While Varanasi is best known as a Hindu holy city, the area just outside Varanasi holds special significance for Buddhists. On our first day in the city, we headed out to Sarnath, one of the four pilgrimage sites named by Buddha and the place where Gautama Buddha first taught the Dharma. This ended up being my favorite place in the area; it is a large ruined monastery/town (partially restored), not very crowded so it’s peaceful, and nearly all of the other tourists were devout Buddhist pilgrims from Southeast Asia, making the significance of the place obvious. Despite the signs stating “DON’T STICK GOLDEN FOIL ON THE MONUMENT”, many of the pilgrims were in fact smoothing 24kt gold foil to the bricks (for cultural/religious reasons I don’t fully understand). Those that weren’t sticking gold foil to things were busily adoring the monuments and/or themselves in flowers.

The low density of people gives Sarnath almost a park-like feel, suitable for a long meandering walk or just sitting in the grass under a tree and reading a book for a while. Behind the ruins is a small nature preserve, home to thousands of birds and some deer (deer figuring heavily in the religious mythology of the place), and the sights and sounds there only add to the serenity that Sarnath has to offer. 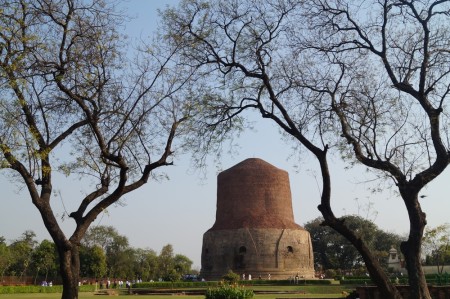 Dhamek Stupa in Sarnath, built 1500 years ago to commemorate Buddha’s teachings in the area. 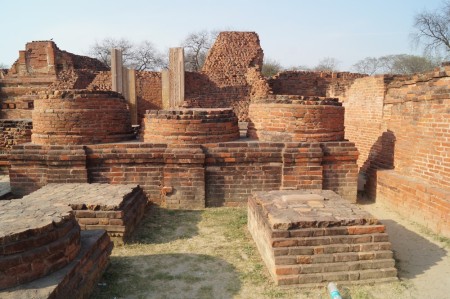 Part of the ruins at Sarnath. 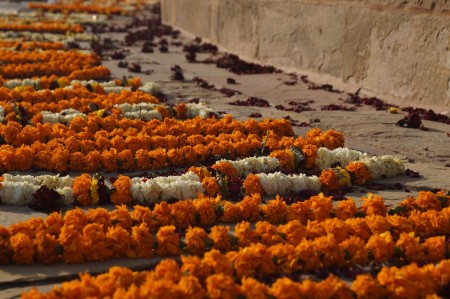 Flower garlands and rose petals on the stupa in Sarnath. 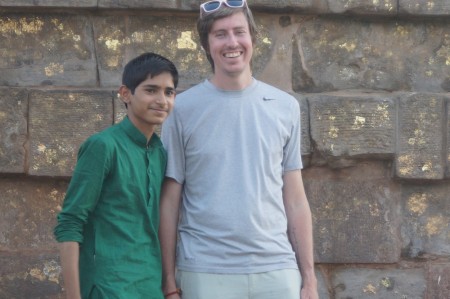 Me in front of the stupa with a random teenager (“can I take one picture?”). Note the gold foil pressed into the bricks behind us.

Standing in stark contrast to the peaceful atmosphere at Sarnath is the ridiculous traffic heading back to Varanasi. It took about an hour and 482 honks of the horn to go the 5.5 miles back to the river by car (this is not an exaggeration) and we were told this is completely normal. The narrow streets (some of the narrowest of any large city we came across in India) and the vast number of cycle rickshaws conspired to produce a truly mind-numbing level of traffic. I’m not particularly fast, but I could have easily run from Sarnath to the Ghats faster than our car took us, and probably had time to shower afterward.

The Ghats at Night

Despite the traffic, we made it back to the river in time to witness one of the main attractions of Varanasi – the Ghats at night. A “ghat” is basically a series of steps or a platform that descends along the riverbank into the river. Many religious rites and ceremonies are carried out on the ghats in Varanasi on the banks of the holy Ganges river, the most well-known being the ritual burning of the dead, and at night several of the ghats are home to religious ceremonies involving dancing, fire, bell-ringing, and chanting. It is this ceremony that drew us to Dashashwamedh Ghat on this fine evening. We paid a small fee (50 rupees or so) to sit in a “special section” that juts out over the river and faces the performers. In hindsight this was probably unnecessary and we end up with kind of a crappy view, partially obstructed by a metal pole.

The ceremony was interesting, but without anyone to explain to us what was going on, it kind of seemed to drag on. Several performers went through various stages of the ceremony, each stage being a prayer to a particular god or concept. Many (most?) of the people watching seemed to be tourists, many of whom were Indian tourists, while the more religiously-inclined were sitting up front. For those in the front, it was a participatory event – there were large bells hung above each performer attached to a very long string, each of which was handed to an audience member so they could ring the bell continuously throughout the ceremony. The pictures below give a taste of the environment, though again, our view wasn’t the best. 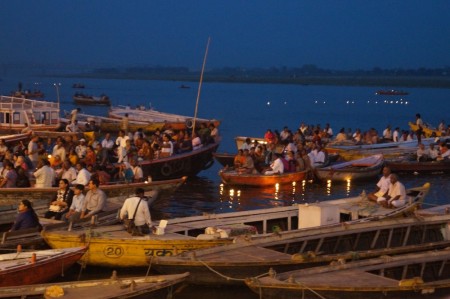 Boats full of people waiting to watch the prayer ceremony on the Ghats at night. The points of light in the water are candles floating on flowers, each representing a prayer. 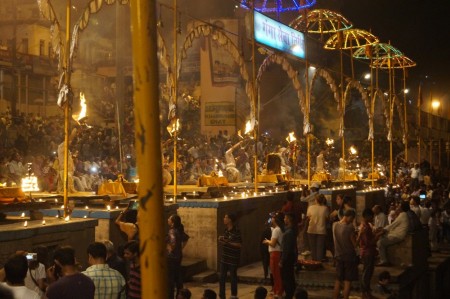 Part of the fire puja on the ghats in Varanasi at night.

More from the fire puja – the performers whirled these flaming multi-tiered candelabras around for about 15 minutes straight. Impressive.

The part of Varanasi that really outperformed my expectations was the Ganges River. About a month ago, we were in Rishikesh near the source of the Ganges and saw it as a beautiful clear blue river flowing quickly over white sand. Here, 550+ miles downstream, the river was a slow-moving, meandering, dirty-brown river flowing over thick mud that nevertheless drew endless crowds of people to its banks.

On our second day in the city, we woke up before sunrise and took the short walk from our hotel to the riverbank and hired a rowboat to take us down the river at sunrise. This short ride was one of the most peaceful, beautiful hours we experienced during our three months in India. The busy crowds of Varanasi weren’t out and about yet, the ashes from the last night’s ceremonies were still smoldering, and the early morning mist hadn’t yet started to burn off. Once the sun started to rise, opposite the ghats, the view from the river became magnificent as the temples and steps reflected the faint yellow-orange glow of the sunrise. 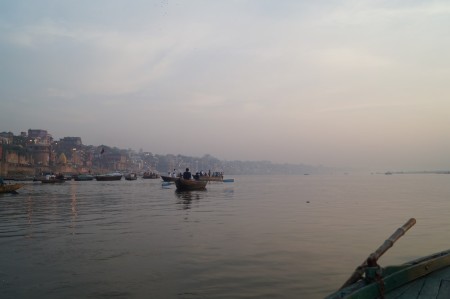 The Ganges at sunrise. Tranquil and misty. 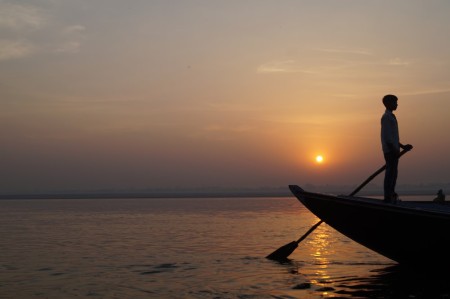 View from our boat at sunrise on the Ganges. The boy pictured was piloting a passing rowboat. 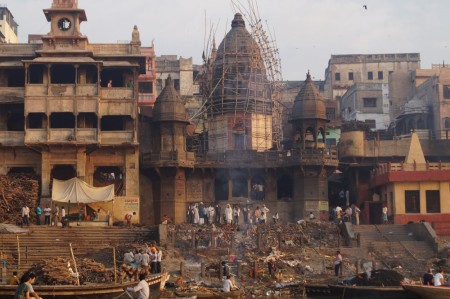 Temple along the Ganges illuminated by the sunrise, the ashes of a funeral pyre still smoking from the previous day.

Varanasi is a sacred place to perhaps billions of people, and you can see that fact on the faces of those who have come to pray, to say goodbye to their loved ones, or to experience the holy city for its own sake. But for whatever reason, knowing it is in fact a sacred place, I was unable to connect to that feeling like I thought I would be. I’ve been thinking about that ever since we left, and I’ve come up with three possibilities.

First, Varanasi is crowded. There are tens of thousands of people who live there and are busily going about their daily lives – shopping, temple, eating, cleaning – all while thousands of pilgrims perform their rites and rituals and thousands more tourists kind of stand around and get in the way. I had the sense there that I was “gumming up the works,” that because it’s so crowded and because it’s so important to these other people, I should get out of the way. This feeling made it difficult to appreciate what was happening around me, I think.

Secondly, by the time we visited, we’d already been in India for nearly three months. Much like the “temple fatigue” people describe after long tours of Southeast Asia (“please, don’t make me go see another temple!”), I had seen plenty of important Hindu sites in my time in the country already. Despite knowing that Varanasi was more important (and why it was more important) than those sites, to be honest it just didn’t seem that much different. It didn’t feel exceptional – either positively or negatively – and thus it kind of felt like I could have been anywhere in India.

Third, and perhaps most important, I was raised in a culture that identifies the concept of a “sacred” place with silence, peace, and reflection. You lower your voice in the Cathedral at Notre Dame, you don’t talk at the Western Wall, and you pay quiet homage at Arlington National Cemetery. In contrast, Varanasi is loud and chaotic – bells ring, people shout and chant, things are on fire – it’s a different kind of sacred, and I think it was just too hard to fight my upbringing on this one. “Sacred places”, “Holy places”, these are “supposed to be” quiet places, orderly places, two things that Varanasi decidedly is not.